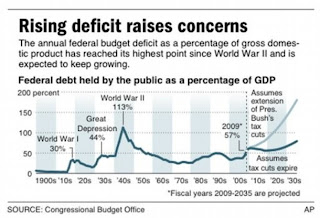 I regularly read Connections, a monthly newspaper published by the Peace & Justice Network of San Joaquin County. In the August/September 2012 issue, Connections published an article by Mattea Kramer, "Four spending myths that could wreck our world." One of the myths identified by Kramer was that "today's deficits have taken us to a historically unprecedented, economically catastrophic place." Her analysis is very similar to that of Paul Krugman, noted economist and New York Times columnist.

I do agree with Kramer and Krugman that our nation's deficit spending does not spell automatic doom, and that national spending that exceeds national income is not the kind of absolute economic evil that will necessarily destroy the republic. I even agree with them that deficit spending may be an economic positive, in some cases, and may specifically be needed right now.

All that said, I also think (along with most people, I believe) that a nation cannot long endure if it continually spends more than it brings in, which means that we need less government spending and/or more taxes. That is not a popular program, politically, but over the long run, income and expenditures do need to balance out, not only on a household level, but even on the national level. That is what I think, at least, and I also think that most people have a similar thought. Suggestions that deficit spending could be perpetuated on the national level forever, to the extent that anyone thinks that, seems ultimately untenable to me. Considering the size of the current accumulated national debt, I don't think concerns about continued deficit spending, adding even more to that debt, are totally off base, even granting (as I do) that we need to be "spending" now, to maintain the positive economic activity that provides jobs and a worthwhile purpose in life for working men and women.

Borrowing to finance current expenditures beyond current income makes sense, it seems to me, only if that borrowing is a genuine "investment" in future productivity - if the expenditures go for something that will make the world (or our individual situation) better.

Here, then, is the problem I see: a majority of our federal deficit spending is dedicated to present and past military-related expenditures that are, in most cases, the very opposite of an "investment" in future productivity. Such expenditures do not make us better off; they are investments in destruction. In the very "best case" scenario, military spending results in no destruction, and is only wasted, in terms of its ability to support positive actions. In the "worst case," of course, the destructive powers in which we are investing are actually used, and impoverish the world more.

The "Budget Pie Chart" published by the War Resisters League, presents our situation in very easily understood and graphic terms. What we need to do is borrow big bucks, but not for more military hardware and wars everywhere. We need to fix city streets, build affordable housing, restore the natural environment, and educate everyone. Not to mention providing universal health care. Spending more than we earn in those areas will, in fact, ultimately result in a "balance" in our budget, because these kinds of expenditures will make us "better off" not "worse off" in the long run, and will increase our future "income," and/or reduce our future expenses.

That is not how we are spending our money now; we are not "investing" but "wasting" it, and I do believe that continued deficit spending on sustaining and expanding a world military empire will ultimately lead us to that "end of Rome" scenario that more and more of the world's peoples must be hoping will overtake us soon.