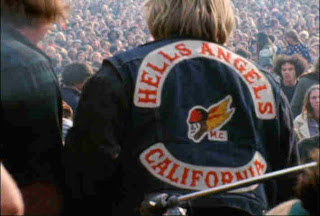 Ken Alex, currently the head of the Governor's Office of Planning and Research, was recently quoted in the San Jose Mercury News, as follows:

When you mention Altamont people think of three things: the Rolling Stones, the Hell's Angels and windmills. Today, we're going to talk about windmills.

I am all with Ken Alex on the windmills. As reported in the Mercury, the "repowering" of the windmills located in the Altamont Pass is a real and positive step ahead for alternative energy - and for the bird life that was being decimated by the older versions of the wind power machines that are so visible to those who use the Altamont pass to go from the Bay Area to the Central Valley.

I do want to indicate that there is another topic that the word "Altamont" brings to mind, or at least to my mind: namely, the failure of the proposed high-speed rail project to make its Bay Area to Central Valley connection through the high-traffic corridor of the Altamont Pass, where it could be located. The California High-Speed Rail Authority has been adamant that it wants to make that connection through Pacheco Pass, which is longer and more expensive. The Pacheco Pass route, apparently, has a feature that the Authority thinks of as an "advantage." As opposed to the Altamont Pass option, which would relieve existing conditions of traffic gridlock, the Pacheco Pass route would stimulate new development in the Los Baños area, thus benefiting land speculators. As the illustration below depicts, if you "follow the lights" you can see that Pacheco Pass is growth inducing, while the Altamont Pass would serve the needs of existing residents and businesses.

My note to Ken Alex: when you next think of "Altamont," put this other topic on your "Altamont" reference list, too. 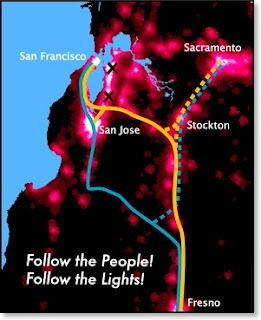