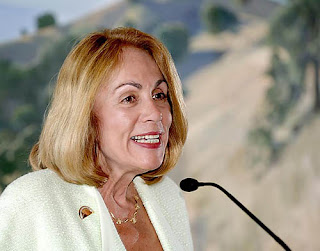 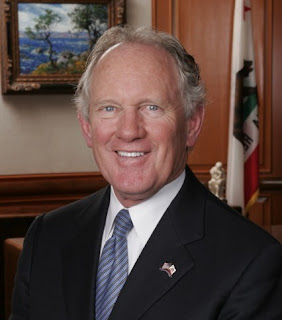 California Forward says its mission is to "work with Californians to help create a 'smart' government – one that’s small enough to listen, big enough to tackle real problems, smart enough to spend our money wisely in good times and bad, and honest enough to be held accountable for results."

Sounds great, doesn't it? The only problem is the details.

Sunne Wright McPeak (pictured) is a former member of the Contra Costa Board of Supervisors. Bruce McPherson (pictured) is a former member of both the State Assembly and State Senate, and served briefly as the appointed California Secretary of State. In all these posts, McPherson served as a member of the Republican Party, and generally adhered to the positions of his party. He was pro-business and anti-regulation. He voted for tax breaks for timber companies and to exempt timber harvests from the California Environmental Quality Act. He ducked many pro-choice and pro-affirmative action votes. When one examines the record of McPherson's campaign contributions, the reason for the positions he took becomes clear. McPherson received campaign contributions from American Water, from ARCO and Big Oil, from the California Pro Life Council, and Philip Morris, and from a campaign fund supported by Pelican Timber, Pacific Lumber, Sierra Pacific Industries, and other large forest operators. McPherson is now running for the Santa Cruz County Board of Supervisors, which is a non-partisan office.

The California Forward initiative will presumably be submitted to the voters of California in November of this year. If it does get on the ballot, I will undoubtedly want to comment further. Right now, however, suffice it to say that the measure submitted by McPeak and McPherson would allow local governments to "veto" fundamental provisions of state law, in certain circumstances.

I served for twenty years as a member of the Santa Cruz County Board of Supervisors, so I have some real experience at the "local" level of government. While it is frustrating, sometimes, to be required to "follow state law," I continue to believe that our state would be immensely worse off if we actually allowed local city and county governments (quite susceptible to the development industry) to escape from the state laws they don't like. These laws include the California Environmental Quality Act, or CEQA, and the California Coastal Act.

Would the California Forward initiative take us "forward?" I don't think so!