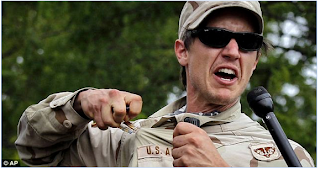 On May 20th, the North Atlantic Treaty Organization, or NATO, held what its website calls a "decisive" summit in Chicago.

Reporting on the event, the Chicago Independent Examiner provided some details not mentioned on the NATO website:

U.S. veterans of the Iraq and Afghanistan wars threw their medals towards the site of the NATO Summit ... in what was called the most dramatic antiwar action by ex-GIs since Vietnam. One-by-one, more than 40 service members from all branches of the military took to the stage to tell their stories while thousands of anti-NATO protesters listened and cheered.


You can read what Amy Goodman says about the protest here. You can also buy or download a copy of The American Songbag, a compilation of songs by Carl Sandburg, and think about the lyrics of "Down By The Riverside," a traditional gospel song.

As we consider how we are remaking the world (currently savaging our institutions of higher education so that the richest among us won't have to pay more taxes), it's worth revisiting those old, old lyrics. There is a whole new educational direction mentioned in that song, and I think the veterans who spoke out in Chicago are prepared to lead the way:

If you'd like to hear Elvis Presley preach this gospel (along with some other fabulous musicians), then click right here. If you just want to brush up on Elvis, here's the link for you.