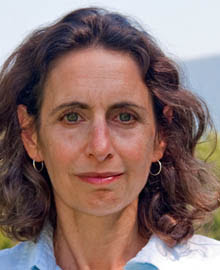 I heard Elizabeth Kolbert speak last Monday night in Mountain View. Kolbert is a science writer for The New Yorker, and has particularly focused on climate change issues. That is what she talked about on Monday. Kolbert was speaking as part of a lecture series sponsored by the Peninsula Open Space Trust (POST), which has recently partnered with other conservation organizations to preserve the CEMEX property on the Santa Cruz County North Coast.

Having regularly read Kolbert's articles in The New Yorker, I was prepared to be impressed. And I was. Here are a few of the facts and observations I gleaned from Kolbert's talk:

Kolbert's latest book is called Field Notes From a Catastrophe: Man, Nature, and Climate Change. She believes that the physical changes that humans are making to the planet will be discoverable and obvious millions of years in the future, and that we have (without knowing it) in fact used our creative powers to establish what amounts to a new "geologic age," the Anthropocene. Global warming changes are only one aspect of this wholesale alteration of the natural world (on which our lives ultimately depend).