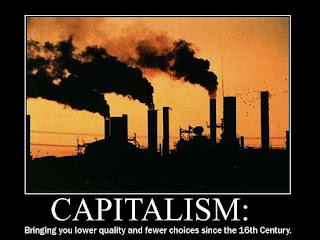 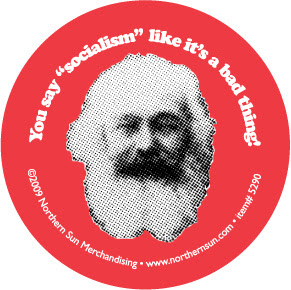 I am not much for the "-ism" words.
A recent letter to the editor, published in the San Jose Mercury News, claimed that "capitalism's track record is proven." The letter writer recounted how his family achieved economic success and prosperity in the United States, with his immigrant father being able to advance in this country in a way that the writer thought that his father would never have been to do in the "socialist" country from which he came. "Capitalism" got the credit for the good things that happened in the United States. "Socialism" got the blame for what was wrong in his father's country of origin.

I am not so sure that the "-isms" should take the credit, or bear the blame. What, in fact, were the specific conditions that helped his father (and his father's family) advance? The letter writer mentions education. Generally speaking, that has been provided in the United States (and in California) by the government, with taxes imposed on the population paying for an education for anyone who wants to pursue his or her individual educational opportunities. Strictly speaking, I am not sure we should give any credit to "capitalism" for our system of public education. Isn't pure "capitalism" a system that should eschew such social contributions to individual advancement?
You can see why I don't like the "-ism" words. In fact, they don't assist understanding, but obscure it. Let's stop worrying about which supposed "system" for organizing our society and economy might be best, and start focusing on the very specific things we'd like to achieve, and that we need to do. By and large, in my estimation, we are failing to meet our challenges, and are failing to realize our opportunities, mostly because we are currently rejecting the need to accomplish things through our "joint" or "community" efforts (something that is often called "socialism," by those opposed to various specific projects of mutual betterment). Almost all of the things we need to do (provide universal health care, provide universal access to education, provide the infrastructure for community and economic growth, to choose a few examples) require the government to tax those with money to provide the necessary services and activities that benefit us all. They are "common" not "individual" efforts, in other words.
You can call that "socialism" if you like. But that way of doing things has a "proven track record." Basically, that's the history of the United States of America.
It would be just as much an error, I think, to blame "capitalism" for all the ills of our society, and all the environmental degradation that humans have visited on the planet since the industrial revolution, as it is to blame "socialism" for the supposed problems that it has caused. Could we forget the "-isms" now, and just agree to focus on actual proposals, instead?
I could see myself wearing a button that says, "You say 'capitalism' like it's a bad thing." But I'll only wear that button if I get to wear the other button, too, the one about "socialism."
Really. You talk about it like it's a bad thing!