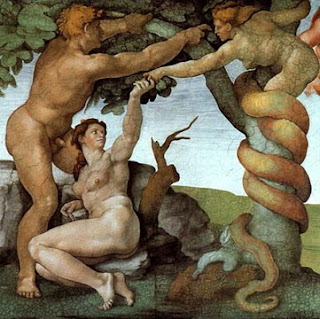 After law school, I went to theological seminary in New York City, and my Old Testament professor told me something that made a big impression on me. He said there were lots of different kinds of "sins" mentioned in the Old Testament, but that the common denominator is quite clear. The essential component of "sin" is our assertion that human beings have the powers of the Creator, instead of recognizing our role as "creatures."

According to the way my professor told it, we are under the authority of the one who created us. We didn't create ourselves, and if we forget that, and start acting like we did, that's when what we do becomes a "sin."

If I am right about my "Two Worlds" hypothesis, and we live most immediately in a world that we do create ourselves, it is easy to see why we start believing that "we" are the creators of everything. We forget, in other words, about that World of Nature that we didn't create, the World upon which we and everything we do is ultimately dependent. Fascinated by our own powers (which are certainly large), we justify the prophecy of Isaiah (Isaiah 2:8), as he inveighed against the sin of idol worship:

Their land also is full of idols; they worship the work of their own hands, that which their own fingers have made.

For Christians, this is Holy Week. It's a good time to think about what Isaiah said.