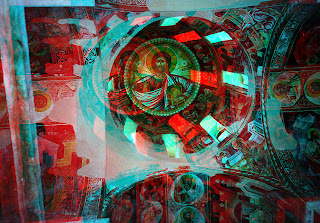 I have been writing this "Two Worlds" blog for over three years, and I am beginning to question the adequacy of my own hypothesis, specifically insofar as it appears to postulate a "two dimensional" reality: (1) The World of Nature, upon which we ultimately depend, and (2) The human world that we create ourselves, and that we most immediately inhabit.

It is not that I want to repudiate my "Two Worlds" view. I continue to think it is very helpful to recognize that we do create (and can change) the reality of the world in which we reside most immediately, while simultaneously recognizing that we live in and are totally dependent on a world that we don't create, the World of Nature, whose laws and limits we must respect, since the laws of that Natural World are absolute.

That said, and that analysis admitted, there seems to be another dimension to our reality, as well, going beyond either "politics," which establishes our human world, or "science," which maps the laws and limits of the World of Nature.

There is a "third dimension" that defines our situation. Besides the Natural World that ultimately sustains us, and the human world that we create ourselves, and that we sometimes act ourselves to sustain and support, there is a realm of the "spirit," to which we all have access, and no accurate account of our reality can overlook or ignore it.

These days, I'm starting to think about that third dimension more.