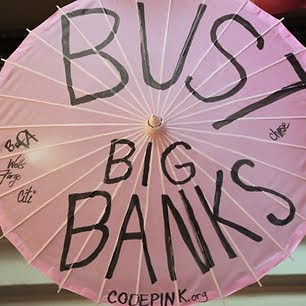 "Participatory democracy" would require a lot of work. Let's face it, our politics has tended to gravitate towards a different system, in which personal involvement is minimized. We have preferred to have our lives administered by others - by individuals and institutions whom we assume must know what they are doing, and whom we also assume must have the public interest at heart. Unfortunately, recent events have demonstrated that these assumptions have largely been erroneous. Neither our elected leaders nor the major institutions that govern our society and economy are in fact dedicated either to good practices or the public interest.

Our banking and financial system is a great example. This area is just too complex for the ordinary person to understand, right? And someone is looking out for our interests, right? Maybe it's the Federal Reserve. Or maybe it's our national government more generally, since we all know that the government regulates these banking giants; surely we can rely on that regulation to protect us.

Not so, as we all now know. But what are we going to do about it? We don't all have to join the Tea Party, but we do need to do something, and getting a handle on the financial institutions that control our national economy still demands more personal involvement than most of use are willing to put in. It requires more study, education, and knowledge than most of us have time for. What is the solution?

One solution is to revise the rules that govern our economy and the financial institutions that have become TBTF - "too big to fail." In other words, one reason that our economy is being manipulated by giant banks, insurance companies, and similar institutions is that we have allowed these institutions to make the system so complex and interdependent that we can't actually understand it anymore, and therefore have to trust the financial elite (presumably more knowledgeable than we are) to make the right decisions. The complexities can be unraveled, and the institutions can be "downsized."

I'm in favor of that. So, it seems, are others, even major players in the current complexities. Harvey Rosenblum, head of the Research Department at the Federal Reserve Bank in Dallas, and Richard Fisher, President of the Dallas Federal Reserve Bank, seem to be two of them. The Wall Street Journal has recently published a column by Rosenblum and Fisher, headlined, "How Huge Banks Threaten the Economy." Their article is big news in the financial press.

Breaking up the giants and taking back control over our own economy and politics will not be easy. It will require a lot of work. No one currently in power (in government or in the major institutions that govern us, directly or indirectly) is going to undertake this task.

It's up to us. Read all about it in Tom Hayden's article. It's titled, "From Port Huron to Occupy Wall Street."