Getting from Amman, Jordan to Petra is a three hour trip. It's a trip worth taking. The photo included at the end of this posting can only partially convey the magic and grandeur of this amazing place.

The trip itself, however, was a sad one for me, since when I asked about the pipeline stacked along the road, I was told that it was part of a major new project, in which a large groundwater basin in the Petra area would be utilized to help sustain the water needs of growth in Amman. There would be water enough for "50 years," I was informed.

I had a sinking feeling that this project (well underway - the pipeline sections were stacked along the entire length of the highway) represented "groundwater mining" on a massive scale, a pernicious and unsustainable practice, and one we are familiar with in Santa Cruz County, where such groundwater mining continues in the still-fertile Pajaro Valley.

Things are as bad as I feared. Here's what I discovered when I got home:

The US$ 990 million Disi project (2008-2012) involves extracting 100 million cubic metres of water a year from a 300,000-year-old aquifer and transporting it over 325 km to the capital Amman. The plan would ensure enough water for Amman for the next 50 years.

However, Disi’s water has 20 times more radiation than is considered safe, according to a 2008 study by Duke University in the USA. The government said the problem can be solved by diluting the water with an equal amount of water from other sources. Jordan University professor Elias Salameh also stated it was not complicated to deal with the radioactivity.

Friends of the Earth Middle East (FoEME) warned against the threat of overpumping, which could cause problems likes problems like sinkholes. The group also says there were no studies that said for certain how long the aquifer water would last.

When Amman is abandoned, it won't have the grandeur of Petra! 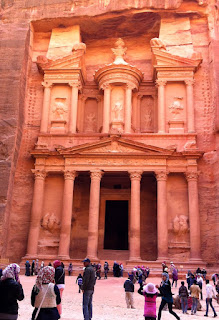