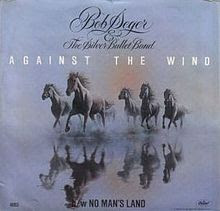 Bob Seger's song, Against The Wind, has always overwhelmed and amazed me with its emotional power. The impact of the song, as delivered by the music, transcends the words alone.

Click the link to hear the music. The lyrics are below.

I am "older now," like the man who sings, and while I am still here in the "fighting line," since I can't get out, I have found that there is, at least sometimes, a wind that blows to the good.

I'm still runnin'
But at least sometimes
I know that very sweet feeling
Of the wind at my back.

Well those drifter's days are past me now
I've got so much more to think about
Deadlines and commitments
What to leave in, what to leave out