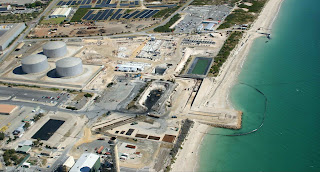 Santa Cruz, the community in which I live, is shortly going to be engaged in a "desal debate." The City Council has committed the City to build a $100-million dollar plus seawater desalination facility, in partnership with the Soquel Creek Water District. The City Council's decision isn't irrevocable (the City does need to go through various legal processes first), but anyone who has followed the issue knows that there is unanimous support for the proposed project on the City Council, and that any effort to advance possible "alternatives" to desal is summarily dismissed.

The City says that "drought protection" is the reason to undertake this expensive project. In fact, however, as an appendix to the City's "Comprehensive Settlement Agreement" with the University of California makes clear, drought protection is only part of the story. The City has promised the University to build sequential modules of a desalination facility in order to deliver water to the UCSC campus, which is slated for a major expansion in the near future. This commitment to a "desal for growth" strategy is called "meeting system demand."

Because the City Council has been so dismissive of those who want to raise questions and propose possible alternatives, a community group is now circulating an initiative position. If qualified for the ballot, and subsequently enacted, the initiative measure would give Santa Cruz City voters the right to "vote" on desal, before any new desalination facility could be constructed. At least during the initiative campaign, and thereafter if the initiative is passed, the community will have an opportunity for a genuine debate and discussion about desal. If you would like to look into the issue, or help in the initiative campaign, I suggest a visit to the Desal Alternatives website, as a place to begin.

From my "two worlds" perspective, I have the following thoughts about desalination: We live, ultimately, in a natural world, which we did not create, and which sustains all life. If we truly understood our ultimate dependence on that natural world, we would construct our human civilization so that we lived within its limits. With respect to water, we would make our community growth and water use decisions match up with the amount of water that is made available by the natural world. This is not, however, the way human beings actually behave themselves, in most cases - not in the "modern" world, at least. We seem to think that our ability to create new human realities will excuse us from the laws and limits of the natural world.

Faced with a limit on water supply, as we are, we will attempt to "manufacture" water, instead of conforming our actions and our world to the limits we find in nature. Make no mistake, "desalination" is simply the name given to an expensive and difficult manufacturing process which requires immense amounts of energy (and thus has initial and escalating energy costs), and that has ongoing adverse impacts on global warming.

The photograph in this posting (albeit of a larger desalination plant than is currently proposed for Santa Cruz) illustrates the realities of what would be built here, if the City Council gives final approval for their desal plan.

If you think that we should be living within the limits of our natural world, instead of trying to "manufacture" a world that can escape such limits, it's probably about time for you to join the debate.