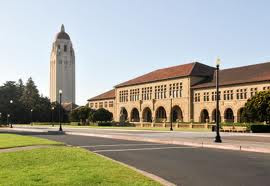 Pictured is that portion of the Stanford University Campus where the Stanford Law School was located in 1965. That is when I began attending law school there. Now, the Law School is found in another place on campus, but this is a photograph that says "law school" to me.

I was asked by a classmate to reflect on my experiences at law school and after, since I was one of the few graduates in my year to go into what might be called "politics" or "public service." I was in good company, though. Another member of the class who ended up in politics is United States Senator Jeff Bingaman, who represents New Mexico.

Here's my reply to my "class correspondent." As you will see, I was reluctant about the law and law school, but I think it all worked out OK!

I ended up in law school because my parents always told me that I “should” be a lawyer, that I had the skills and abilities, and it would be a great thing to do. They were probably right about the skills and abilities. I had a bad experience in high school, in that my desire then was to be an engineer. Great concept, until I took PSSC Physics and math. I concluded that I did not, in fact, have the necessary skills and abilities for that kind of profession, but I could write, and I could talk, so my parents’ argument was convincing. So was a great presentation by then-attorney Pete McCloskey, later an anti-war Member of Congress. He came to a Palo Alto High School Career Day, during my senior year, and made being a lawyer seem pretty exciting.

Without much more reflection, and essentially accepting my parents’ suggestion, I settled on my career choice before even going to college, and throughout my undergraduate years at Stanford, my destiny as a lawyer was taken for granted. By the time I got around actually to going to law school, however, I was a lot less sold on the concept. My participation in the Honors Program in Social Thought and Institutions at Stanford convinced me that I actually wanted to be a college teacher/writer. My father, particularly, strongly opposed any change of course, and since I was on the obedient side (at least where parental directions were involved) I persevered. Nonetheless, I entered law school reluctantly.

I did love my first year contracts course with Professor Hurlbut. As I saw it, the essence of the “contract” is our ability to decide the future by writing down our intentions, and by then binding ourselves to perform our written commitments as promised. That appealed to me, since I was an American History major in my undergraduate years, and I believed that the American Revolution had forged a new political order in the world based on promises mutually made and kept. My Honors Program introduction to the concept of “Utopia” as a way to create a better world again led me to believe that we could accomplish great things simply by articulating what we wanted, on a theoretical basis, and then actually doing those things in the real world. Other law school courses, with their emphasis on money, business, and personal conflict, were a lot less compelling to me, and after my first year, I decided that I should either quit Law School or “buckle down.” Being the kind of person who likes to live up to expectations, I decided to “buckle down.”

The second year was even worse. I flunked “International Law,” which turned out not to be what I expected, but a course in how to make international businesses rich. That was not a priority I found compelling. In fact, what I found compelling was the need to stop the War in Vietnam. During my second year in Law School, I decided I would resist the draft (and not just become a conscientious objector, though as a Quaker I qualified for that I-O classification). I was determined to resist any and all participation with the draft system, en toto. I left Law School, among other reasons, in order to lose the automatic student deferment that was bestowed on those in my age cohort who were continuing successfully to pursue their academic studies.

After a brief stint in the Merchant Marine, and a trip to Asia as one of the “Volunteers in Asia” sent overseas by the former Dean of Freshmen Men, Dwight Clark, I did refuse induction into the armed forces, but I was never prosecuted, because the Selective Service System so mishandled my classification process. I came back to Law School (again, at my father’s urging, more than for any other reason), and graduated a little late (in the Law School class of 1969, rather than 1968, where I belonged). While I did not take the Bar Exam immediately upon graduation, I did take it a year later, but continued to be reluctant to move into a legal career. I worked in the Stanford Bookstore, got married, and then went to New York City as a Rockefeller Brothers Fellow at Union Theological Seminary.

In 1971, my wife Marilyn and I moved to Santa Cruz so I could provide some help to my father, who had gone back to law school (at Santa Clara), and who had graduated a year before me. He had just opened his private practice in Santa Cruz, and was foundering (so he said). I left the theological seminary for law practice, to help out my father, but my reluctance was maintained. Mostly, I wrote wills and represented conscientious objectors to the draft; I am happy to report than my father and I never lost a single case!

In 1972, I was hired to represent a community group opposing the development of a major hotel and convention center on Lighthouse Field, the last open space on the coast in the City of Santa Cruz. This was a defining community fight, and we won it. During the course of my legal representation of the Save Lighthouse Point Association, I frequently spoke in public gatherings of all kinds, including City Council hearings held in the Civic Auditorium where 1,500 persons or more were in attendance. In 1974, I wrote an initiative measure which we qualified for the June ballot. It passed, decisively, the first initiative adopted in the City of Santa Cruz since the initial adoption of the City Charter, sometime in the 1940’s. Through my advocacy for the Save Lighthouse Point Association, I became something of a “notable” figure in the community (beloved by just over 50% of the public, and reviled by the remainder). I was asked to run for County Supervisor, to represent the district that included the City of Santa Cruz (and the newly-established University of California campus). I won my first election in November of 1974, and ended up surviving three recall attempts and serving twenty years on the Board.

During the time I was on the Board, I wrote and the voters adopted, by a referendum vote in June 1978, a growth management system that has fundamentally altered the future growth and development of Santa Cruz County. It’s still in effect.

Having ended up spending the largest part of my professional life in politics and public service, I can testify that I am amazingly grateful for my education at Stanford Law School. Despite all my reluctance to be a lawyer, I did take the courses, and I did learn about the law, and I found in the end that our public life is built upon what I think it is appropriate to call the “practice” of law.

In the human world, the world we create ourselves, we make the laws. And we “practice” how to get the effects we want. This “practice” is, in the public realm, nothing other than “politics,” the debate and discussion, controversy and contention that precedes the social (political) decision that writes down the law we determine will guide our actions. This kind of law is different from what happens in the world of nature, where the laws are not susceptible to human modification, and which, like the law of gravity, can never be broken.

Because we make the laws, we can change them. Those who know law, those who can write and interpret the legal directions we give ourselves, are bound to be importantly involved in the discussions about what we “ought” to do, which is the ever-present legal and real challenge for us, a challenge which is above all a political challenge.

Whether it is the War in Vietnam (or any other war), or global warming, or growth management, every citizen needs to understand and glory in our ability, together, to write the words, and to make the laws, that will create and define the reality in which we live.