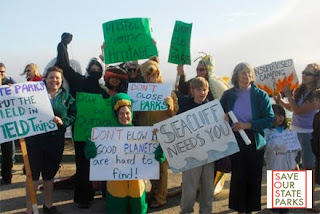 Whenever I go downtown now, and start walking on Pacific Avenue in Santa Cruz, from Cooper Street towards the beach, I find myself asked if I want to "save state parks?" Of course, I do want to do that. If you're downtown, I bet you will be asked, too. If you stop, and sign up to help (and I certainly recommend it), you'll find that the suggested way to "save state parks" is by joining TNC.

I think it is a good idea to join TNC, if you are not already a member, but for the record, there are some other ways to "save state parks," too. The California State Parks Foundation, for instance, has made "saving state parks" one of its main goals. They are a major participant in the Save Our State Parks Campaign. Santa Cruz locals should also know about Friends of Santa Cruz State Parks. Don't forget to join that group!

On the TNC website, you will find that TNC's main mission is not to "save state parks." The most prominent appeal on the website, at the time I'm writing this, is an appeal to "Save Nature." TNC suggests you can do that for only 60 cents a day.

It strikes me that "saving state parks" and "saving nature" are fundamentally different propositions. Our state parks are political creations; they are something that we have decided to include in the human world we most immediately inhabit. Since we created the state park system, we can also dismantle and destroy it, and it looks like California is headed down that road. "Saving State Parks" is a political task, and getting together with friends and neighbors (as well as raising money for a statewide political effort) is absolutely in order. That kind of political activity is what you see pictured in the image on this post.

As for an appeal to "Save Nature," I am a bit more troubled. In my view, the idea that the world of Nature is a human creation (to be continued, or not, based on what humans do) is what has caused us a lot of problems in the first place.

I am hoping that Nature will "save us," since the world of nature is the world upon which we ultimately and utterly depend.