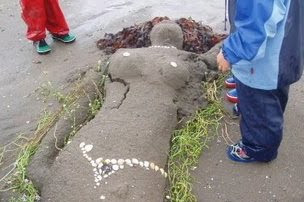 I consider The Nation magazine to be essential reading, and I found the editorial statement that appeared in the December 12, 2011 edition to be particularly thoughtful.

In that editorial statement, titled "Born-Again Democracy" in the print version, William Greider quoted Lawrence Goodwyn on Occupy Wall Street. Goodwyn says that Occupy Wall Street's "open-door, nonhierarchical membership" commits people to "democratic conversation," a sine qua non of real democracy. This is the kind of conversation, according to Greider, that is needed "to inspire the people to become creative citizens again."

I recommend the Greider editorial, and I also recommend "democratic conversation."

In searching for an image to match the title of today's posting, I came across the Sculpturing Words blog, written by a woman who teaches in early childhood training programs in Norway. Among other things, she and her colleagues are seeking ways to foster "democratic conversations in kindergarten," since they have found that such conversations are important for children’s learning. Trying to identify what characterizes the kind of "good conversations” they would like to stimulate, they have discovered that “wondering questions,” where a teacher really doesn’t know the answer, are essential for children’s learning through conversation. The woman who wrote the blog asked a "wondering question" of herself: What happens in the opposite situations, when a teacher knows the answer (which unfortunately often is the way one speaks to small children)?

It's a revealing question, and the answer is pretty obvious. Questions from a teacher to a child, when the teacher knows the answer, are the opposite of that "open-door, nonhierarchical" approach to conversation that will let a child realize and learn to trust the child's own judgment and power.

In the context of our democracy, how often do our public hearing procedures and other legislative processes really allow us, as citizens, to "wonder" about how to answer the questions that confront us, instead of being "told," by the so-called experts, elected or contracted, that there is only one way to do it - the way they say is right?

The key to democracy is to let us all wonder, together, about what we should do. This is indeed what inspires the people to become creative citizens again.