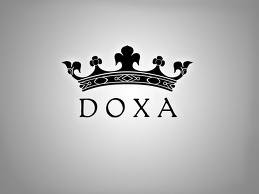 I ran across the word "doxa" recently, in some article I was reading, and my mind went blank. I told myself, "I know I know this word," but I really didn't, and I was forced to search for the meaning online.

Of course, I quickly found the meaning online: "Doxa (δόξα) is a Greek word meaning common belief or popular opinion, from which are derived the modern terms of orthodoxy and heterodoxy."

Heterodoxy and orthodoxy. Of course. It all comes back to me now. The word "doxa" means "common belief," as opposed, for instance, to the "truth."

Doxa also (apparently) happens to be a rather popular brand of watch, as anyone who looks for an image to go with a discussion of the word "doxa" will shortly discover. It also turns out that the word "doxa" has been taken over by the Christian community, starting somewhere back around when the New Testament was written, with the word meaning "glory," as far as these Christians are concerned.

I'm sticking with "common opinion or belief," and I am generally in favor of "discounting" doxa. Whether that opinion and belief is "orthodox" or "heterodox," the real question ought to be: is it true?

So much of the doxa we run across aren't!