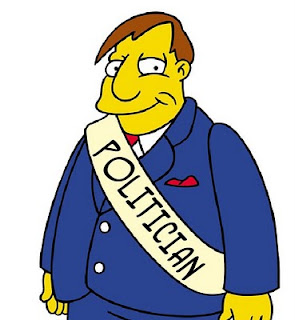 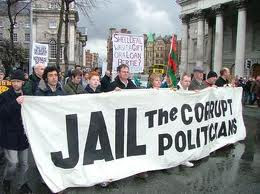 I left elected office over sixteen years ago (in January, 1995), and since that time I have headed up two nonprofit organizations, have served as an environmental lobbyist in the State Capitol, have taught environmental law, and have practiced law as an environmental attorney. Nonetheless, all this time having gone by, I still self-identify as a "politician."

I did serve as an elected official for twenty years, and entered the political arena and was elected five times. And I lost an election, too, when I tried to move from the local to the state level of government. I am not ashamed or sorry to have been a "politician," as I think I really was, though I am sure that I would be ashamed if I had been the kind of "politician" that most people seem to think about when they use that word.

It would be hard, in fact, to think of an "occupation" that conjures up more negative connotations than that of "politician." If you do an internet search on the word "politician," you don't find too many positive references. Click on the images I have placed in this post, and you'll find some chilling observations. Or, consult the songs of Bob Dylan. I tend to look to Dylan for insight and guidance, and he doesn't have one positive thing to say about "politicians," anywhere, in any song with which I'm familiar. And he has lots of negative things to say!

(1) A person who is active in party politics; or
(2) A seeker or holder of public office who is more concerned about winning favor or retaining power than about maintaining principles. ...

There are some other (and slightly more favorable) definitions in the list, but I tend to think that the second definition gets at what most people believe; namely, that "politicians" are more interested in winning favor or retaining power than anything else. That is, they are "self" interested, more than interested in what's best for the public. Unfortunately, I believe that what most people think is essentially right. Most "politicians" are self-promoting and self-interested, above everything else, and if you read The Federalist Papers, you will see that the framers of our Constitution were quite realistic about the temptations we all feel towards self-interest, and they more or less accepted the fact that this would likely be true.

I don't think that I am immune to the temptations of self-interest, but I was personally fortunate in the way I got involved in politics, in that I did not decide that I wanted to be a "politician" on my own, and then try to become one. It is also true that the job, at the time, paid less than the job I had, and there weren't any health or retirement benefits associated with the public office. I didn't, in other words, figure out that this might be a good way to make a living, and then go after it. People asked me to run for office to represent them, because of my past involvement in a significant community struggle, and since I think that the essence of being a "politician" is to represent those who elected you, it's good if they ask you, rather than the opposite.

Furthermore, I was lucky to be a "politician" in the smallest county in the State of California (geographically speaking, and recognizing that the City and County of San Francisco is not really a "county" but a "City and County"). Because Santa Cruz County is so conveniently small, I could never have gotten away from meeting up with the people I represented on an almost everyday basis, even had I wanted to avoid them. And, of course, I didn't want to avoid them. I went out of my way to meet them in every way I could, instituting the practice, for instance, of holding an open public meeting each Monday morning, before a Tuesday Board meeting, so that I could hear from anyone who wanted to talk to me, on any topic coming up before the Board of Supervisors, and so that they could convey their views to me directly, before I voted.

The problem with our politics, I believe, is not really with the "politicians." We shouldn't expect them, as the framers of the Constitution knew, to be extraordinarily oriented to the public good. The problem is with ourselves. We have not maintained a system that ensures that those who represent us will actually be accountable to us, on a personal basis. The "size" of our political districts does make that hard; it is a lot harder most places than it is in a place like Santa Cruz County. But "hard" is not "impossible." My thought is that if we want our "politicians" to be accountable to us, and to represent us, rather than to be self-promoting and self-interested, we will need to spend a lot more time on "politics" than we seem to be willing to do.

No one likes "politicians" who sell out the public interest for their personal political or financial gain. But how to stop them? A significant number of us need to be so engaged and willing to spend the time necessary that we can make this threat, and make it real: "if you dare to depart from the public interest, and from doing what the people who elected you want you to do, we will absolutely see to it that you are thrown out of office. And if you broke the law, we'll see that you are thrown into jail, to boot!"

We, as citizens, need to approach our "politicians" that way. They are not to be deferred to. They are to defer to us. If a "politician" doesn't do what the majority wants, then the majority has to be so organized itself that it can get rid of that offending official. And to make sure that's true, we need to be paying attention, all the time, so we know when our "politicians" have gone wrong.

Whether fortunately, or unfortunately, it just happens to be a fact: If we want to have self-government, we need to get involved ourselves.