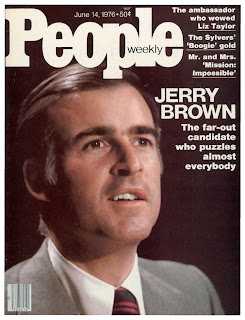 Jerry Brown was elected Governor the first time around in November 1974. That was exactly when I was first elected to the Santa Cruz County Board of Supervisors. I have always liked Governor Brown (and still do), and actually served briefly on the California State Air Resources Board as one of his appointees. I had hopes that Governor Brown (this time around) might deal with the proposed high-speed rail project in a responsible way. Unfortunately, the Governor's recent announcement on high-speed rail indicates a preference for boosterism over responsibility.

I happen to know quite a bit about the proposed California high-speed rail project, at the level of detail, and not just at the the level of "vision." Not everyone, but most of the people I know, believe that high-speed rail would be a very wonderful thing. Even the President of the United States thinks that. It's a great "vision."

Unfortunately, the project currently proposed would decimate the agricultural resources of the California Central Valley, massively impact natural habitats, and require that elevated freeway-like structures be built right through the middle of some of the nicest communities on the San Francisco Peninsula, including my own home town, Palo Alto. If that weren't bad enough, the proposed project follows a route dictated by politics (read land speculation), not by good transportation policy, and would not conform either to the requirements of Proposition 1A, the high-speed rail bond that puts up $9 billion for the project, or to the dictates of common sense. What's needed is a better-designed project, with a different route, and one that is likely to be feasible economically, which the current project isn't.

These are not just my observations. Essentially, this is the view repeated by the Legislative Analyst's Office, the Senate Transportation Committee, the State Auditor, and the State Treasurer, Bill Lockyer. And that is just a "partial list" of the critics. The California High-Speed Rail Authority, which has official control over the project, has a demonstrated record of mismanagement, and has designed a project that is almost certain to fail, economically, environmentally, and otherwise. This is because the Authority, whenever real problems have been identified, just repeats how wonderful it will be to have a 21st Century, high-speed rail transportation system for the state. That affirmed, the Authority then gives itself permission simply to ignore the problems.

I had better hopes for the Governor. He is, I continue to believe, sincerely interested in running the state of California in a responsible way (like balancing the state budget, for instance). In announcing his support for the project, however, Governor Brown said that it was his ambition to be "part of the group that gets America to think big again." No problem there, but "thinking big" has to be accompanied by a realistic plan actually to accomplish the big ideas. And there's the rub.

It might be that Governor Brown should go back to his bookshelf, and remember one of his favorite books from his first term, E.F. Schumacher's book, Small Is Beautiful. Color me wistful.