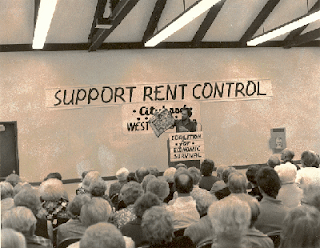 I read on Tuesday that the City of Capitola, in Santa Cruz County, is thinking about repealing its rent control ordinance. The Capitola ordinance, now in jeopardy, protects renters in the City's mobile home parks.

Rent control is based on the premise that private property is subject to public regulation through politics. In general, in the United States, federal, state, and local governments have a "plenary" power to protect and advance the public health, safety, and welfare. The plenary powers of government are called its "police powers," and they constitute the foundation of our democratic society.

When an issue affecting the public health, safety, and welfare rises to importance, the public has the right, through its democratic governmental processes, to make laws and rules that address the issue. Those laws and rules can involve taxing individuals, collecting the money for public purposes, and then directing expenditures made on behalf of the public from the funds so collected. These laws and rules can also involve the direct regulation of private activities, including the use that private owners make of their private property.

There are limits to that democratic, plenary power. First, laws and regulations that affect individuals, and their property, must be adopted according to "due process" principles. In other words, the democratic debate that precedes decisions affecting individual rights must be fair. Second, the government is not entitled to "take" an individual's private property without just compensation. The courts have made absolutely clear that "taking" someone's property means either physically to wrest it from their control; or, in the alternative, to deprive the owner of that property of all of its value. If a government tries to do either one of those things, then it must pay the private property owner the full value of the property taken.

Zoning a person's property to restrict uses on the property may deprive the owner of an opportunity to make more money than the owner could make without the regulation. That's perfectly legal and constitutional. Restricting agricultural land to agricultural uses, for instance, thus forbidding the construction of new shopping centers and subdivisions on the land that the government decides should be reserved for food production, is perfectly legal and constitutional. Similarly, there is no "taking" of a landlord's property when the government imposes a rent control rule, and restricts the price that the landlord can charge a tenant. There is no "taking," that is, as long as the landlord gets a "fair rate of return" on his or her property.

In Capitola, under the existing rent control system, a park owner is apparently limited to charging a tenant in one park $285 per month. Without rent control, the park owner will charge the tenant $2,500 per month. Even a restriction of this magnitude is legal and constitutional, if the park owner will receive a "fair rate of return" on the owner's property. The courts decide the question of what is a "fair rate of return."

Everywhere in California, it is harder and harder for local governments to respond to genuine community needs, by enacting fair and constitutional rent control systems, because of state laws that restrict the inherent democratic powers of the local governments. If we opt always to benefit "individuals," and to help them maximize their own economic positions, we abandon the effective use of the plenary powers of democratic government that allow us, together, to address the community level challenges that affect us all. Whether or not to maintain rent control, in the face of threats from property owners, is really a question about whether or not to stand up for democratic self-government.