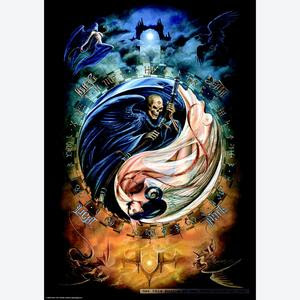 Anyone who propounds a "two world hypothesis" must obviously confront the concept of "dualism."

Dualist theologies have often been characterized as "heresy," in the Christian tradition, and the heretical enters in when a theology posits two gods, not one.

My favorite theologian and philosopher, Soren Kierkegaard, has titled one of his books Purity of Heart Is To Will One Thing. The tradition of the Religious Society of Friends (the Quakers), seeks "unity," and being of "one mind," and clings to the concept of "simplicity" as a basic tenet of Quaker "Faith and Practice." "Dualism" is disfavored, in other words, where I come from.

Nonetheless, I do think that my "two world" hypothesis is helpful (and not heretical). I don't suggest that the world we create is or ever could be equal to the world of Nature, the world we don't create, and in which we find ourselves as "creatures" not "creators." Instead, I like my "two worlds" as a way to understand and explain the dimensions of human possibility.

My experience in politics (the very purpose of which is to make collective changes that we think would be beneficial) has demonstrated to me that humans often assume that certain things that could actually be changed are not susceptible of alteration, and that limiting and unchangeable realities can be ignored. We assume, for instance, that we have to provide for automobiles in all our planning, and that we don't have to do anything, really, to deal with the fact that the combustion of hydrocarbon fuels will lead to the radical alteration of the biosphere upon which our lives depend.

Different rules apply in the World of Nature than in the human world that we create. In our world, anything that doesn't contradict the "laws of Nature" can be accomplished. But woe unto us if we think we can ignore what Nature requires.

I say "two" worlds, but not two "gods." The World of Nature is where the ultimate truths of our existence will be found.