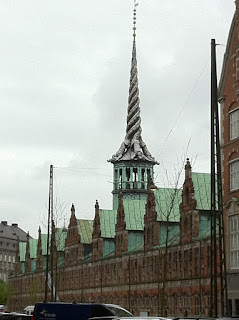 We went looking for Kierkegaard in Copenhagen. We found a Soren Kierkegaard Place on a map, but no evidence on the ground. We inquired at the Tourist Information Center, and were told where Kierkegaard's body was buried, and that his family home had been torn down.

We learned that there was a small exhibit on Kierkegaard in the town museum, and we trudged a long way to get there. At the museum, we found that the exhibit was inaccessible because the room in which it was kept was in a hall being renovated in connection with an exhibition on Mexico City, which just happens to be Copenhagen's sister city.

Luckily, the museum attendant on duty was a Kierkegaard fanatic. We talked Kierkegaard, and he broke the rules and let us in. We saw Kierkegaard's desk, and got an address where Kierkegaard had rented, just before he died, and we went away with the idea that the best way to get to know Kierkegaard is to read his books. Luckily, they are all still available, and in the language of your choice.

Other things in Copenhagen were very nice. Don't miss the Tivoli Gardens Amusement Park when you visit. Quite a step up from the Santa Cruz Boardwalk.