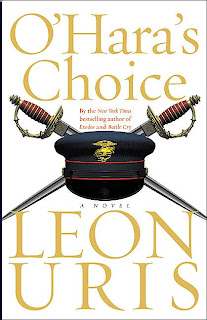 O'Hara's Choice, a novel by Leon Uris, is not a book I'd normally read. In fact, I haven't really "read" it, hands on paper. I have, though, listened to the novel as one of the "books on tape" that accompany me wherever I drive. The Santa Cruz Public Library has a pretty extensive collection of such materials, in CD and tape versions, now shelved separately at the Main Branch, and available at the other branches, too.

This particular book is, substantively, a history of the early years of the United States Marine Corps. In terms of plot, it's a romantic love story.

O'Hara's Choice turns out to be a paean to patriotism. Here's what the hero, Zachary O'Hara, has to say to a class of Marine Corp cadets, as he expounds upon the Monroe Doctrine:

We won our freedom with ideas, more powerful than arms ... We enter the New World not so much to plunder, to crush people, or to rule. All mankind whispers our name, America, with reverence. So long as we maintain our basic human decency, the world will behold us as the keeper of man's most noble flame ...

O'Hara's Choice was published in 2003. Whatever may have been the case in the historic times described in the story (and I am now inclined to doubt that the "reverential whispers" mentioned here were ever actually spoken with respect to the foreign policy of the United States), there were certainly no such "reverential whispers" in 2003. Nor are there any today.

Let's not delude ourselves. The world today does not perceive "America" in the way that the O'Hara character describes it. And there is a very good reason for that. The United States does not, in fact, conduct itself, as a nation, with a primary commitment to "basic human decency." Among other things, we are sending drone planes to other countries to kill the people our agents deem hostile, with no trial or review by any public process, and if other people (admittedly not deserving of death, but just happening to be in the wrong place at the wrong time) are killed too, well, that's just too bad. This is not my idea of "basic human decency."

Many citizens of the United States apparently believe that the words of Zachary O'Hara still describe our national conduct and character. Let's not delude ourselves.

I am in favor of going back to a commitment to "ideas," not "arms." But to see how far from that we are (and were, in 2003), check out our federal budget. Our single largest commitment is to war. As someone said: "Where your treasure is, there will your heart be also." Actually, that was Jesus, speaking as a sociologist.

Right now, we can forget about saying that our commitment is to "ideas" not "arms." The arms have it.