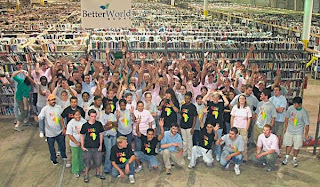 I could probably keep on writing for quite some time about John R. Searle's book, Making The Social World. Perhaps just one more thought: the kind of "speech act" that Searle believes has the power to create our social reality is what he calls a "Declaration."

One of the primary theoretical points of this book is to make a very strong claim. With the important exception of language itself, all of institutional reality, and therefore, in a sense, all of human civilization, is created by speech acts that have the same logical form as Declarations [Pages 12-13].

In my way of thinking about the world - about the human world that we create - I see the logical progression as being: politics; law; government.

In this system, our "laws" are our "declarations" of what we have decided, after we have gone through the discussion and debate that is the function of politics. "Government," in this way of looking at it, is the world we create. We "govern" ourselves, and establish the realities which then govern our possibilities and behavior, by the declarations that I call "law."

Unlike the laws of Nature, which are perfectly descriptive of what happens in fact, and what must happen, and which are laws that can never be "broken," our human laws are "prescriptive" not descriptive, and tell us what we want to do, and ought to do, not what we have to do. The origin and foundation of our human world, thus, is human freedom.

As we do what we say, we make the world in which we live. And just like the "social entrepreneurs" pictured here, we can make it better!