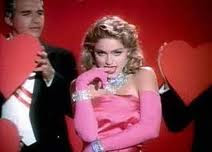 How, you may ask yourself, does Madonna, the "Material Girl," get associated with my ruminations on social ontology?

It's easy to explain. As I do these blog entries, I pick a title, then look for an image to go along with the title. The Google Images search brings up many pictures to illustrate my words, and this one popped up because Creston Davis, a professor in the Department of Philosophy and Religion at Rollins College, used this image to grace his own blog post about philosophical materialism, a posting that included the words "social ontology." I am always amazed by the wealth of challenging thinking that now exists in the so-called "blogosphere." Even the simple "Next Blog >>" tactic finds you very interesting stuff.

John R. Searle, whose book, The Making Of The Social World, I have been reading has this to say about social ontology:

As I said in my earlier reference to The Making Of The Social World, I generally don't favor books that use mathematical symbology and abstruse vocabulary to discuss issues that should be important to everyone. Translating what Searle says, however, into more common language, he is claiming that society is created by our mental intentions, as action is then based upon them. If true, there is a whole realm of reality, the world of reality that encompasses everything we think of as either "society" or "civilization," that is purely the product of what we intend to do, and then accomplish.

In other words, we live most immediately in a world that we create.