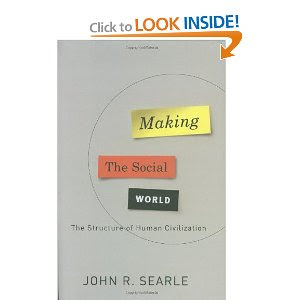 I have an edition of John Searle's book that looks just like the illustration. I am recommending the book to my "philosophical friends."

In other words, this is not a book for the "practical minded." It is "theoretical" in its intentions. It is providing a theory to explain how humans create human civilization, and it happens to have, as its basic premise, an explanation with which I completely agree; namely, we create the world we inhabit, the "human world," the world of human "civilization," by "speaking a truth," and by "saying" it, creating it.

There is real power in that idea!