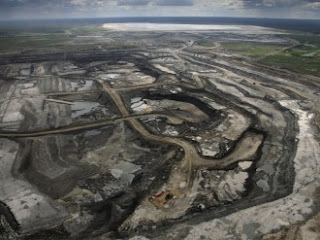 I recently saw a clickable reference to "Tahoe Tar Sands," a juxtaposition of wording that is truly appalling to anyone who loves Lake Tahoe even a little bit, and who knows even a little bit about what tar sands are, and how they are developed.

I honestly thought that I would find an article about proposed tar sands development near Lake Tahoe when I clicked on the link. Instead, I arrived at a blog called Tahoe Is Walking On.

"Tahoe" is the name taken by an unnamed person who describes himself as an "Avid Trader, and an Accomplished Environmental Professional full of irony and contradiction, thriving on the many challenges life brings." "Tahoe" is "walking forward on intuitive improvisation," and writes in his blog about Global Finance, Energy and Environment, News, Views, and Stories of Interest. The blog I discovered was, in fact, talking about tar sands development, but not around Lake Tahoe. Mostly in Alberta, Canada, but with efforts to bring the good news to Utah.

Unfortunately, what I read about tar sands development in Alberta is just as appalling as such developments would be in the Tahoe Basin. Here is a snippet from an online edition of Ecologist:

"Albertans call that the smell of money!" says the helicopter pilot as we fly over Alberta’s tar sands. Even 2,000 feet above open-cast mines, man-made lakes of mining waste and refineries belching fumes and flames, there is the acrid stench of burning oil. It stinks.

Until the 1960s, this Canadian landscape was unspoiled boreal forest, home to moose and caribou and the Clearwater people who hunted them. Today, this First Nations’ people go shopping for processed food in an industrial wasteland. Flocks of migratory birds die as they land on toxic lakes, that cover over 50 square kilometers. Downriver, further north, in the remote First Nations’ settlement of Fort Chipewyan, on the shore of Lake Athabasca, the incidence of bile duct cancer is significantly higher than expected.

The Alberta government rebuffs such claims of environmental and medical impacts.''We do not proceed with development at the expense of the environment," says the website of Alberta Environment.

The government prefers to highlight that the Athabasca tar sands is the second largest known deposit of oil in the world, after the Middle East, and, geopolitically, represents a secure source of oil ....

We are destroying the world of Nature, upon which we are totally dependent. We are doing it directly (see the picture included in this post), and we are doing it more indirectly, by burning the oil produced from these tar sands deposits, and thus increasing the pace of the global warming that is threatening the existence of human civilization.

When we don't know where the butchery is being done, we don't feel compelled to act. If they were trying to do it in Tahoe, known by millions for its beauty, it simply would not be allowed. But in a place that virtually no one knows?

They'll get away with it! They will unless we stop them.

And we can't wait around until they come to our own backyard. If we care about Lake Tahoe, we care about Alberta and its boreal forest.

Where Nature is concerned, there is just the One World.