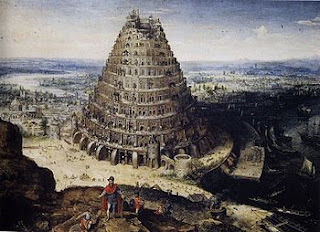 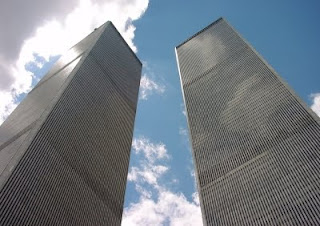 The story of the "Tower of Babel" is sometimes told as a story about how we came to have different human languages. Sometimes, it is told (as in the Icarus myth) as a story about how divine retribution is the inevitable result of human arrogance and pride. Trying to go too high means, when failure comes, that we fall from a great height.

With the Tower as metaphor, I am interested in the height.


I am going to reference the Wikipedia account, which contains a number of web-based cross references. I am not going to duplicate the references here, but you can track them down through the Wikipedia link.

As Wikipedia notes, the book of Genesis does not mention how tall the Biblical Tower was. The Tower's height, however, is apparently discussed in various extra-canonical sources. For instance, the Book of Jubilees mentions the Tower's height as being 5,433 cubits and 2 palms, or about 8,150 feet. The Third Apocalypse of Baruch mentions that the "Tower of Strife" reached a height of 463 cubits, or 695 feet, taller than any structure built in human history until the construction of the Eiffel Tower in 1889, which is 1,063 feet in height.


A typical medieval account is given by Giovanni Villani (1300): He relates that the Tower measured eighty miles round, and it was already 4,000 paces high, or 3.68 miles. The 14th century traveler John Mandeville also included an account of the Tower, and reported that its height had been 64 furlongs or 8 miles, according to the local inhabitants.


The 17th century historian Verstegan provides yet another figure. Quoting Isidore, he says that the Tower was 5,164 paces high, or 4.7 miles, and quotes Josephus to claim that the Tower was wider than it was high, more like a mountain than a tower. He also quotes unnamed authors who say that the spiral path was so wide that it contained lodgings for workers and animals, and other authors who claim that the path was wide enough to have fields for growing grain for the animals used in the construction.


In his book, Structures or why things don't fall down, Professor J.E. Gordon considers the height of the Tower of Babel. He wrote, "brick and stone weigh about 120 lb per cubic foot, and the crushing strength of these materials is generally rather better than 6,000 lb per square inch. Elementary arithmetic shows that a tower with parallel walls could have been built to a height of 1.3 miles before the bricks at the bottom were crushed. However by making the walls taper towards the top they ... could well have been built to a height where the men of Shinnar would run short of oxygen and had difficulty in breathing before the brick walls crushed beneath their own dead weight."


The Twin Towers of the World Trade Center, pictured here, were completed in 1973, and were then the tallest buildings in the world. The tallest of the Twin Towers was 1,368 feet in height.

The Sears Tower in Chicago became the tallest building in the world in 1974. It still stands, and is 1,451 feet tall.


Since 1974, even taller towers have been constructed. Currently, the tallest building in the world is believed to be the Burj Khalifa, in Dubai, at 2,717 feet.

None of these buildings is anywhere near the 1.3 mile height limit postulated by Professor Gordon as the highest possible height that the Tower of Babel could have attained, using then available materials. 1.3 miles is equal to 6,864 feet.


Whatever historical researches may reveal about the height of the Tower of Babel, and whatever engineering calculations might tell us about the ultimate height that any tower can attain, one thing seems clear enough: every tower, reaching for the sky, must be rooted in the Earth. We build upon the world of Nature, which is the foundation for all we do. When we go beyond the limits that Nature imposes, our constructions fail. And the higher we are, the farther we fall.