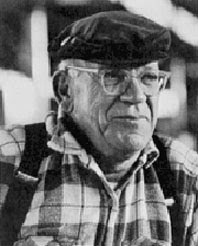 Eric Hoffer was quite a guy. A longshoreman turned social writer and philosopher, he authored ten books and was awarded the Presidential Medal of Freedom in 1983. Click this link for a brief Wikipedia biography, or this one for a list of quotations.

I can't remember now why this happened, but I met with Eric Hoffer in his academic office at UC Berkeley sometime during the time I was at Stanford, which had to have been during the period from 1962 to 1969. If I had to guess, it was probably before I went to law school, so prior to 1965. I ultimately wrote a thesis for the Honors Program in Social Thought and Institutions at Stanford, which I entitled The Future of Change In America, and I bet my conversation with Eric Hoffer was part of my research effort. I distinctly remember being grateful for his gracious willingness to meet with me, which definitely occurred outside of any of his official duties.

At any rate, my wife and I recently got involved in a discussion of high-speed rail (this being an issue on which I am working as an environmental attorney) in the context of her observation that both federal and California state taxpayers are about to make massive investments in this system (the delivery of any functioning version of which is highly problematic) at a time when Interstate 5, the main north-south route in California, is beginning to look like the road from Cairo to Alexandria in Egypt. For those who haven't been on that road in Egypt, the comparison is not intended to be a compliment.

Eric Hoffer told me that a civilization is measured not so much by what it does new, but by how well it maintains what it has already built. This is something I particularly remember he told me personally, in his office, when I visited him in Berkeley, in whatever year it was.

I have never forgotten this observation, which struck me then, and strikes me now, as fundamentally correct, and which provides an "easy test" of how well we are doing in our efforts at civilization.