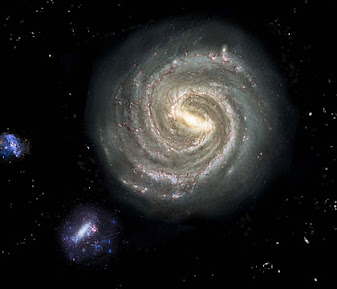 Nancy Ellen Abrams and Joel R. Primack will read from their new book at 7:30 p.m. tomorrow night, on April 26th, at the Capitola Book Café, 1475 41st Avenue in Capitola, California. Their new book is entitled, The New Universe and The Human Future: How a Shared Cosmology Could Transform the World. Among other things, the book discusses exponential growth, and how growth can't go on forever. Here is a quote from their Chapter 5:

Exponential growth always ... rises slowly, then shoots up sharply like a bent elbow. Growth of something is “exponential” whenever the rate of growth is proportional to the amount of whatever is growing—in other words, the more there is, the faster the rate at which it grows. In biology, a species can get into runaway reproduction and grow exponentially, but if it then over-consumes the resources of its ecological niche, there is an abrupt die-off. Take, for example, a hypothetical bloom of pond scum that doubles each day. It starts slowly, but speeds up. Until the last couple of days, the pond looks nice and the fish are happy, but on the last day the scum chokes the whole pond and everything dies. It looks a lot like the graph of the human population over the last millennium.

As we write this book, the world population is approaching seven billion. Population experts agree that Earth cannot support another doubling of the human population. We will hit a limit before that. Hitting a limit is inevitable not only for the human population but probably even sooner for the exponential growth of natural resource use by each person. While population was increasing six times, carbon dioxide emissions increased twenty times, energy use thirty times, world gross domestic product a hundred times, and mobility per person a thousand times! If all the people in the world were to consume like Americans, which many aspire to do, it would take the resources of four Planet Earths. A typical person in the United States uses his or her weight in materials, fuel and food every day. The United States and a few other countries have been dumping far more than our share of carbon dioxide into the atmosphere and oceans.

Clearly, we are beginning to hit material limits. Increases in greenhouse gases are now causing worldwide climate changes, the effects of which we are seeing in the form of record-breaking heat waves and storms and the melting of the polar icecaps. We are running out of fresh water and topsoil worldwide. We have destroyed more than half of the earth’s forests and wetlands, and we are appropriating for our own consumption a large and increasing fraction of the biological productivity of the entire earth. Our actions are killing not just individual organisms but wiping out entire species at the greatest rate since the extinction of the dinosaurs and many other species after the meteor impact sixty-five million years ago.

What most people do not understand, because it is counter-intuitive, is how little time is left once an exponential trend becomes noticeable at all. The pond scum doesn’t seem to be a danger to the pond until the next-to-the-last day. This is why we need to figure out quickly how to transition out of the current period of worldwide human inflationary growth as gently and justly as possible. Cosmology can help—by providing a model for this seemingly insurmountable task. The model fits because this pivotal moment for humanity is mirroring the most important pivot point in history: the beginning of our universe.

Review that last paragraph carefully. There is our problem. It's the "Bug In The Bottle" problem I have already talked about. We don't see how close we are to the line. And then ... it's too late.