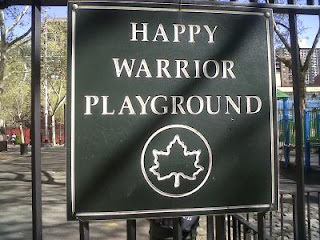 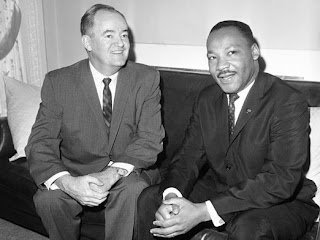 Various politicians (and others) have been called "The Happy Warrior." Hubert Humphrey, pictured here with Martin Luther King, is among them. The Happy Warrior Playground, also known as "Goat Park," is named for someone else.

The "Happy Warrior" sobriquet refers to the "how" of life, and while I agree with Peter Douglas (and with Nietzsche) that "a person who has a Why to live for can bear almost any How," I don't think that the "How" question is any less important than the "Why" question. According to my father, in fact, it may even be more significant. I well remember his admonition to me: "It's nice to be important, but it's more important to be nice."

Too bad for the military metaphor, I think, but I do believe that Wordsworth got it right:

Character Of The Happy Warrior

WHO is the happy Warrior? Who is he
That every man in arms should wish to be?
--It is the generous Spirit, who, when brought
Among the tasks of real life, hath wrought
Upon the plan that pleased his boyish thought:
Whose high endeavours are an inward light
That makes the path before him always bright:
Who, with a natural instinct to discern
What knowledge can perform, is diligent to learn;
Abides by this resolve, and stops not there,

But makes his moral being his prime care;
Who, doomed to go in company with Pain,
And Fear, and Bloodshed, miserable train!
Turns his necessity to glorious gain;
In face of these doth exercise a power
Which is our human nature's highest dower;
Controls them and subdues, transmutes, bereaves
Of their bad influence, and their good receives:
By objects, which might force the soul to abate
Her feeling, rendered more compassionate;

Is placable--because occasions rise
So often that demand such sacrifice;
More skillful in self-knowledge, even more pure,
As tempted more; more able to endure,
As more exposed to suffering and distress;
Thence, also, more alive to tenderness.
--'Tis he whose law is reason; who depends
Upon that law as on the best of friends;
Whence, in a state where men are tempted still
To evil for a guard against worse ill,

And what in quality or act is best
Doth seldom on a right foundation rest,
He labours good on good to fix, and owes
To virtue every triumph that he knows:
--Who, if he rise to station of command,
Rises by open means; and there will stand
On honourable terms, or else retire,
And in himself possess his own desire;
Who comprehends his trust, and to the same
Keeps faithful with a singleness of aim;

And therefore does not stoop, nor lie in wait
For wealth, or honours, or for worldly state;
Whom they must follow; on whose head must fall,
Like showers of manna, if they come at all:
Whose powers shed round him in the common strife,
Or mild concerns of ordinary life,
A constant influence, a peculiar grace;
But who, if he be called upon to face
Some awful moment to which Heaven has joined
Great issues, good or bad for human kind,

Is happy as a Lover; and attired
With sudden brightness, like a Man inspired;
And, through the heat of conflict, keeps the law
In calmness made, and sees what he foresaw;
Or if an unexpected call succeed,
Come when it will, is equal to the need:
--He who, though thus endued as with a sense
And faculty for storm and turbulence,
Is yet a Soul whose master-bias leans
To homefelt pleasures and to gentle scenes;

Sweet images! which, wheresoe'er he be,
Are at his heart; and such fidelity
It is his darling passion to approve;
More brave for this, that he hath much to love:--
'Tis, finally, the Man, who, lifted high,
Conspicuous object in a Nation's eye,
Or left unthought-of in obscurity,--
Who, with a toward or untoward lot,
Prosperous or adverse, to his wish or not--
Plays, in the many games of life, that one

Where what he most doth value must be won:
Whom neither shape of danger can dismay,
Nor thought of tender happiness betray;
Who, not content that former worth stand fast,
Looks forward, persevering to the last,
From well to better, daily self-surpast:
Who, whether praise of him must walk the earth
For ever, and to noble deeds give birth,
Or he must fall, to sleep without his fame,
And leave a dead unprofitable name--

Finds comfort in himself and in his cause;
And, while the mortal mist is gathering, draws
His breath in confidence of Heaven's applause:
This is the happy Warrior; this is He
That every Man in arms should wish to be.