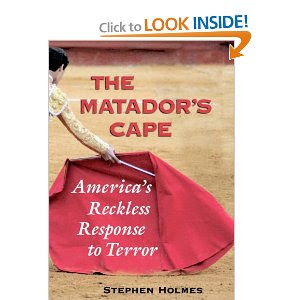 I wanted to talk a bit more about distraction as a political strategy, and what came to mind as a suitable metaphor, and as an appropriate title, was "The Matador's Cape."

What could be a more classic example of distraction, to deadly effect?

I generally prepare these postings by deciding on something to write about; then picking a title; then searching for an apt illustration matching the title; then finally writing up my thoughts.

Turns out that I am not the only one who thinks that a lot of contemporary politics is based on a strategy of distraction, and who likes the metaphor of "The Matador's Cape." Stephen Holmes' book seems to validate my concept, in this case with specific reference to the 911 attacks, intended (according to Holmes) to bait the United States Government into hasty and ill-advised actions that would distract it from the right sort of response to the threat of terrorism in the world today. The result? Lots of action. More terrorism. The terrorists win.

The real question for voters in the United States ought to be who is using the 911 attacks to distract whom? I have a suspicion that Bin Laden may not be the one waving the cape at American voters now.