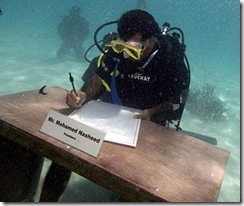 Cornell University Professor Suzanne Mettler has apparently written a book (not yet out in print, as far as I can tell) that carries forward the thoughts expressed in her September 2010 paper, "Reconstituting the Submerged State: The Challenges of Social Policy Reform in the Obama Era."

I have learned this from an opinion piece by David Sirota, appearing in the February 18th edition of the San Francisco Chronicle. Sirota has his own book coming out, too.

"Submerged government" refers to those services and programs provided by government that drop out of sight, because they become an accustomed part of what we consider our every day, taken for granted, reality. They are "out of sight," and "submerged" because they are working! Mettler and Sirota discuss whether or not we can continue to rely on such submerged governmental services at a time in which the public is increasingly "against government," caught up in what I think of as paradoxical, auto-immune reaction to politics, since we "are" the government. At least, we ought to be, and think we are.

Hatred of government (in either of its aspects) is a kind of self-hatred. And it is ultimately debilitating. Mettler and Sirota are pointing out that what we have to lose, when we lose faith in politics, is more than just what goes along with the talking heads on the news networks.

What we stand to lose is what makes our world work.