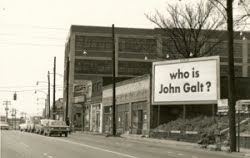 The most recent edition of The Nation Magazine reviews a couple of new books about Ayn Rand. Presuming that you are already familiar with Ayn Rand, I recommend the review, "Garbage and Gravitas," by Corey Robin. I was particularly interested in these concluding words:

Rather than [urging that we] remake the world in the image of paradise, she looked for paradise in an image of the world. Political transformation wasn't necessary. Transubstantiation was enough. Say a few words, wave your hands and the ideal is real, the metaphor material. An idealist of the most primitive sort, Rand took a century of socialist dichotomies and flattened them. Far from needing explanation, Rand's success explains itself. Rand worked in that quintessential American proving ground—alongside the likes of Richard Nixon, Ronald Reagan and Glenn Beck—where garbage achieves gravitas and bullshit gets blessed. There she learned that dreams don't come true. They are true.


My concept of politics is, precisely, the idea that we can create, through political action, the world we most immediately inhabit, and that we can make our dreams come true. A kind of "utopianism" is built right in to my understanding of politics, and the kind of politics I advocate requires a lifetime of personal involvement.

According to Robin (and I think this is right, though I hadn't had this thought till I read the review), Ayn Rand offers a kind of "cheap grace" alternative to genuine politics. For her, politics is not our joint work to create a new world; it is all about an individual's decision to advance himself, or herself, and to declare that "what is," in our already-existing world, is in fact the goal. This is why Rand is such a darling of the conservative right. She is profoundly anti-revolutionary, and justifies the world as it already exists, already under the sway of the powers that be.