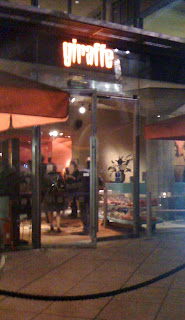 On a sunny Friday in London it turned out to be possible, for almost the entire day, to forget the controversies and philosophical thoughts that mostly preoccupy me - even on a trip intended to provide a respite from such cares.

First, a nice long walk from the Grand Hotel on Trafalgar Square to the British Library; then, lunch with a British friend; then, an unexpected trip by bus to the Old Vic, to see a free performance of Six Degrees of Separation; then, a quick drink at the Royal Festival Hall, a walk along the banks of the Thames, past the British Film Institute and the skateboarders and the outdoor book fair, to a performance of Top Stoppard's Every Good Boy Deserves Favour at the National Theatre. Finally, a walk back across the Golden Jubilee Bridge to the Embankment Underground Station, close by the hotel.

Here's what I left out: dinner at the Giraffe Restaurant and Bar (very near the National Theatre). This place gets a rave review for food, atmosphere, and friendly service. I promised them a blog reference. They deserve it! Next time in London, head for the Giraffe!