35 / An Exchange of Correspondence 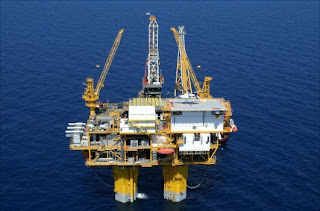 For me, an "environmentalist" is someone who appreciates both that we are ultimately dependent on the World of Nature, and thus must respect its laws and limits, and that we are also creative beings in our own world, a world created by our own "political" choices. True "environmentalists," thus, seek to use the political powers to which we have access to change the realities of our world, and to reflect in our world the laws and limits of the Natural World that we do not create, and upon which all life ultimately depends.

One thing we now know is that the political choices we have made in our world, basing our civilizations on the burning of hydrocarbons, is radically undermining the long term stability and viability of the World of Nature, and that we need, as a matter of the very greatest urgency, to stop burning carbon fuels.

For me, therefore, every expression of satisfaction about the "discovery" of a new oil field, or every effort further to develop and exploit oil fields that we already know about, sends exactly the wrong message, from an environmental point of view. The momentum of our past choices is carrying us forward towards the continued use of hydrocarbon fuels; that's understood, but it's not a fact that should be celebrated, and "environmentalists" should not be continuing to push forward this wheel of doom.

In this context, I have personally concluded that the "Tranquillon Ridge" oil development proposal, as touted by Governor Schwarzenegger among others, would be terribly detrimental. The idea is to allow new oil drilling on the Tranquillon Ridge, in "state waters," with the promise that this new drilling will be coupled with the cessation of other oil drilling in federal waters, and with some land donations, and that the upshot of new oil production on the Tranquillon Ridge will be to ratchet down oil development in the future. (Incidentally, or maybe not incidentally, the oil company involved, and the State of California, would make a lot of money).

Because I continue to participate in a nationwide coalition of environmentalists against offshore oil drilling (a coalition I and other Santa Cruz County officials helped create) I am aware that the approval of the Tranquillon Ridge "deal" by California will almost certainly assist efforts to open up new OCS oil drilling around the nation's coasts, including new drilling in federal waters off California. Several days ago, I wrote about this, and expressed my opposition, and I heard just this morning from one of the attorneys for the Environmental Defense Center, the environmental group based in Santa Barbara that has been spearheading environmental support for the Tranquillon Ridge deal. Thus, I can now add the following exchange of correspondence.

Environmental lobbyists will be meeting today (Thursday) in Sacramento, to debate the merits of the Tranquillon Ridge proposal. I wish I could be there!

From: Gary Patton
To: lkrop@edcnet.org

I am on an "around the world" trip, and will be until March 15th, so I am out of telephone contact. The best email for me is: gapatton@stanfordalumni.org. I think that Pedro Nava reprinted and distributed an item from my blog (www.gapatton.net) which commented on the paid lobbyist issue. I haven't seen what he did. While I do have email access, I am mostly out doing things during the day (or most recently sleeping off jet lag), and so I am not on my computer on a constant basis, as I normally am. Thus, I've just woken up (in London), and see that I have nine pages of email items to review, including this email from you, which is near the top of the list. I haven't reviewed the other nine pages, nor have I seen the item to which you are responding. Hopefully, Pedro did not misquote my blog post.

Here's the problem I see with the agreement you executed: instead of simply agreeing "not to oppose" the deal you negotiated (as the groups did in Tejon) you negotiated an agreement to "support" the deal. Further, and this is the real problem I tried to identify in my blog post, you contracted to support the agreement by actively lobbying with governmental agencies having approval power whenever PxP requests you to do so, not as EDC may independently decide. Therefore, by the terms of your contract, EDC is no longer an independent voice on this proposed deal; you are the voice of PxP with respect to the benefits or not of the deal you negotiated.

I realize, on the merits, that there are arguments for the agreement. However, the arguments pro and con were not debated generally in the environmental community prior to the agreement being finalized, and so we can only comment on the agreement now, after it has (reluctantly) been made public by EDC. I, personally, think that the contract is a "bad deal" for the environment, particularly as it will almost certainly "undo" efforts at the Congressional level to constrain future developments on the federal OCS. Naturally, I'm sorry that EDC thought otherwise, though I respect the difference of opinion.

The lobbying provisions of the contract, however, make it clear that EDC's current position is, of necessity, the position of PxP, and so for those who tend to suspect that PxP sees this deal from the perspective of making money for PxP, instead of from the perspective of environmental protection, it means that any arguments by EDC at this juncture should receive exactly the same deference that an argument by a paid lobbyist for PxP would make. Oil companies do have good arguments, sometimes, and environmental lobbyists are used to negotiating with lobbyists for the oil industry, and I hope that environmental lobbyists approach that kind of negotiation professionally, focusing on the merits. But make no mistake, from my point of view EDC should be treated like any other paid lobbyist for the Tranquillon Ridge deal; you are getting money for supporting the project. What the environmental groups in Sacramento should do should be based completely on what they think about the merits of the proposal.

As I say, on merits, I think it's a "bad deal" for the environment, and lobbyists used to dealing with the "fix is in" type of proposals (and this is one of them) will be legitimately skeptical that opening up new drilling in state waters is going to lead to a good long term result.

Sorry we disagree on this one. Best!

I wish you had spoken with me first. At least as a courtesy. But also to be responsible and get the facts. I can respond to these allegations and accusations. (E.g., I am not a paid lobbyist for PXP. I am an attorney representing Get Oil Out! and Citizens Planning Association, two groups that have been fighting offshore oil for more than 40 years.) Please, let's talk, and next time please talk to me before writing something like this. I would certainly have done the same for you.