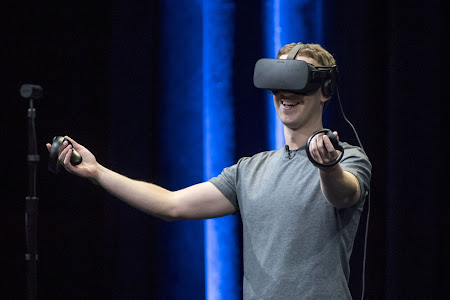 Here's Mark Zuckerberg, in the picture above, welcoming us with open arms into a "virtual world" that he is inviting us to occupy. Rental payments for our occupancy will go to Zuckerberg, of course!
A couple of very different articles in the August 28-29 edition of The Wall Street Journal, including the one with Zuckerberg's picture, captured my attention. First, Dan Gallagher and Laura Forman, tech writers for The Journal, told us about Zuckerberg's efforts to get us to enter into the "Metaverse," a "virtual world" that many techies see as "the next big thing." In the hard copy version of the newspaper, their article was titled, "The Real Problems Of the Virtual World." Online, the article bore this title: "Big Tech Wants You to Live in a Virtual World. Prepare for Real Problems." The subheading summed up their advice as follows: "User discretion is advised."
The second article in The Journal, seemingly quite different, was an "Ask Ariely" advice column, covering the following topic: "Why We Ignore Friends to Look at Our Phones." Dan Ariely, who writes this column, is a Professor of psychology and behavioral economics at Duke University.
Gallagher and Forman want us to know that the "Metaverse," a world inside a headset, is "hot, sweaty and even nauseating." Think twice, they advise, before strapping a device onto your face that then allows you to "interact with cartoon-versions of co-workers and friends." It's just not worth it; that's what they suggest. The "Ask Ariely" column tells us that people who "snub" their friends, to look at their phones, may well be "depressed and socially anxious." That's why they do it.
While I generally agree with the observations made in these articles, as just recounted, I have a different take on what's happening at the tech/human interface.
In the last several years, I have come to believe that many of our real life problems derive from one, profoundly important fact. Human beings are always tempted to prefer their own creations and constructions - the human world that they create - to the world they didn't create, the "Natural World," or the world that religious people call the "World That God Created."
Sitting on a sunny patio at the end of the day, not that long ago, chatting with several friends about all sorts of things, from politics to flower gardens, I found one of those friends repeatedly diverting his attention to his phone - just the phenomenon discussed by Ariely. Surely, most of us have had that experience. Real people, right there in front of you, in "real life," are not as compelling as those people with whom you can be in contact through your phone, or tablet, or laptop. The "Metaverse," as proposed, is a further step. The headset that Zuckerberg and other techies are promoting makes it impossible even to choose between "real life" and the life transmitted to the headset user online. As long as you wear that headset, the world inside the headset is the only world you know.
These new technological gadgets, I think, represent a progressive next step in an ongoing human effort to substitute out the "Natural World" as the locus of the "reality" in which we live, and to attempt to live within a world that humans create, supposedly freed from any dependence on anything that humans have not created themselves.
User discretion is certainly advised! The fact is, all of our human constructions are ultimately dependent on a world that we did not create. The more we forget this fact, the more we value "avatars" over real people, and the more we value our human creations over the "Creation," itself, the quicker we will undermine the conditions that make life in "our world" possible.
This is a kind of "theological" perspective - a perspective more real than the "Metaverse" is what I'd claim!
Image Credit:
https://www.wsj.com/articles/big-tech-wants-you-to-live-in-a-virtual-world-prepare-for-real-problems-11630056626