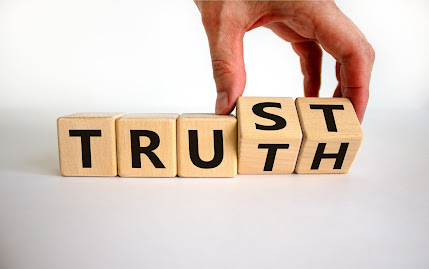 Frances Moore Lappé, writing on August 9, 2021, tells us that when the public has no reliable way to tell the difference between truth and lies, democracy is at stake. Here is a link to her article, "Truth Be Told," published on the website of the Small Planet Institute.
Lappé is basically talking about the "Big Lie," the claim that former President Trump "won" the 2020 presidential election, and that his reelection was "stolen" from him. As The New Yorker points out (click the "Big Lie" link), "Big Money" is helping to perpetuate the "Big Lie." However the "Big Lie" is being disseminated, however, large numbers of people appear actually to believe it - and apparently they are not "faking it," either. While I seriously doubt that Rudy Giuliani is among them, millions of people really and sincerely do believe that the 2020 presidential election was "stolen" from former president Trump by the Democrats.
As Lappé notes, when truth is compromised, so is trust in government. That's where we are now. Lappé has well described the issue - and the dilemma. We do have a real problem, and it would be good to address it.
Lappé's solution is a little less convincing than her diagnosis, at least to me. She suggests that we should institute, here in the United States, a system she indicates is used in New Zealand, which country is ranked higher than the United States in its commitment to political and civil liberties by a group called "Freedom House." Before reading Lappé, I had never heard of Freedom House, and its website provides very little information on its qualifications for making such judgments:
Freedom House ranks New Zealand fourth in “global freedom scores,” while the U.S. falls behind sixty nations. Since 1989, New Zealand’s Broadcasting Standards Authority chaired by a judge has maintained radio and television standards. It responds to citizen complaints with full transparency online as to its reasoning, decisions (11 percent upheld), and appeal process.
I am not at all clear that an official governmental commission, given the right to pronounce some news as "untrue," and then, perhaps, effectively to ban such news from public dissemination, would help eliminate the truth/trust problem. Besides the fact that this approach does seem to run afoul of the First Amendment to the United States Constitution, I tend to think that what is now a lack of trust in the government would only multiply if some governmental body was able, officially, to suppress views that this governmental agency determined were "untrue."
Telling the truth is an imperative, if democracy is to survive. No question about that. Trying to insure that no one tells "lies," though, is a lot more problematic.
People who think we need some sort of governmental agency to decide when "lies" are being told, so the government can then take action to suppress them, may want to move to New Zealand. Personally, I am sticking with the First Amendment, and I'm not moving!
Image Credit:
https://www.smallplanet.org/single-post/truth-be-told-saving-our-endangered-democracy