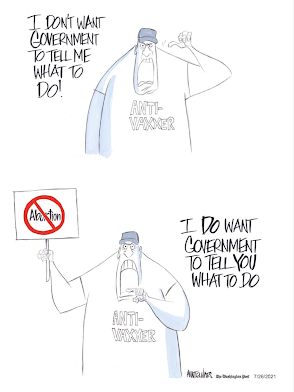 This cartoon, obtained from The Washington Post, exemplifies a view of "government" that is not reserved for those of the "conservative" persuasion. Citizens who have all kinds of different political views often think of "government," or "the government," as some kind of independent agency or force.
To many of us, in other words, "government" is most often thought of as a "noun," and thus is properly set off by the use of that word "the," that definite article. Government is a reality that is seen as independent of ourselves, and of our own actions, and thus is quite properly a focus of resentment and opposition - or, sometimes, of passionate support.
Let's be clear. "Government," properly understood, is a "verb," not a "noun."
"Government" is the process by which our nation, or some other operation or activity, is given specific direction. It is something we "do," not a thing we confront as an independent, external reality.
My favorite "equation," shown below, helps make this clear:
Politics > Law > Government
"Government," as a control over what happens, or is supposed to happen, is provided by "laws," which outline (usually in detail), exactly who is supposed to do what, when. In a representative democracy, if we don't like what is going on, then we need to change the "law," and to provide different instructions. "Politics" is the way we do that, and so questions about mandatory masking requirements against a pandemic, or whether or not and on what terms a woman may be able to obtain an abortion, come out of a debate and discussion among all of the "governed." Because we can change our human laws, a change in government is always within our grasp. "Politics" is our first and last recourse. We live, most immediately, in a "political world."
When people start understanding "government" as a noun, and not as a verb, resentments can quickly surface, since that "thing," "the government," is telling us what we have to do, and we don't associate "government" with our own activity and democratic choice. Government becomes a hostile force. We are outraged when such an outside force is compelling us to do something we don't want to do, and that we think is wrong, but we are naturally happy when that hostile force is making other people do the things we think are best. There is, really, no contradiction in the cartoon depiction above, if "government" is something that exists independently of our own activity.
"Government," as an external agency, institution, or force, is also something we are compelled to "observe," since it is perceived as distinct from our own activity. But if we understand "government" as a verb, as action itself, then we will fairly quickly deduce that we are "actors," as well as "observers," where "government" is concerned.
Diversity, or "plurality," as Hannah Arendt calls it, is inherent in our human condition. We are different, our circumstances are different, and we want different things. If we are able to see that this is, in fact, our inevitable human situation, and that we are "in this life together," then we will realize, and start making use of, the opportunities that "politics" provides. We will have to persuade and cajole, not just rant and resist.
This all seems pretty easy understand - at least to me - though I know it is really not. When our own power to act, our personal freedom, is seen as an outside force, often deployed against us as "the government," we have met "alienation" in its most intimidating and concrete form.
"Government?" That's you and me, baby. It's what we do. Let's talk about it, shall we?
Image Credit:
https://www.washingtonpost.com/opinions/2021/07/26/keep-government-womens-lives/