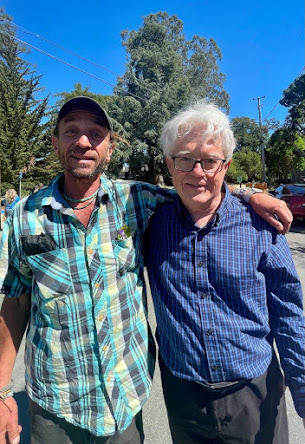 David Kupfer (pictured on the left) is a peripatetic journalist of the "progressive" variety. He is also, specifically, a longtime environmental advocate. He is currently based in Boca de Iguanas, Mexico.
David stopped by Santa Cruz on June 13, 2021, having just visited with his brother in Manhattan, and with Stephen King in Northampton, Massachusetts, a week or so prior.
Since David was going to be in Santa Cruz County anyway, where he once lived, he hunted me down to find out the status of our local environmental efforts. He reminded me of the last time we met in person, about forty years ago, at a conference in Santa Barbara sponsored by the Local Government Commission on Energy Conservation and Renewable Resources. The LGC has a long and distinguished history, and I was, for quite some time, the statewide chair. It's still going strong, today.
While I didn't actually remember the long ago meeting to which David referred, I didn't doubt his word that it actually did take place, and I was happy to get a download of all his recent meetings and doings.
Anyone checking out David's Facebook Timeline will notice that the "peripatetic" designation does fit. David has met with (and interviewed) a host of interesting people over the course of his journalistic career, all of them doing important and worthwhile things. This link to The Progressive Magazine provides a small sample. You can also search the archives of The Sun Magazine for even more interviews. I kind of like his interview with "Peter Coyote on Buddhism, Capitalism, And The Enduring Legacy Of The Sixties."
Anyway, I raised the topic of David's many interviews in the course of our recent conversation, which was held at Ocean View Park in Santa Cruz. Would he, I asked, be trying to publish a compilation of his interviews, bringing them all together?
"Funny you would ask," David replied, "I have, in fact, been thinking of doing just that, though I am finding that publishers don't think a collection of interviews would be a very big seller, and I might have to self-publish." David said he was thinking of titling this book - a book that might or might not be published (by himself or someone else) - "Lives That Matter."
As I was thinking it over, after David hopped into the vehicle that was taking him towards Davis, California, it struck me as a random thought that "Lives That Matter," as a title, could be misinterpreted, if someone heard that title as another version of "All Lives Matter."
"Black Lives Matter" is sometimes countered with an "All Lives Matter" claim, and that effort at transmogrification has been seen as an attack on the idea that we need, as a nation, to confront our long history of racial injustice. That isn't where David was coming from, of course. What he meant, I know, is exactly what his proposed title states: all of our lives matter.
His. And mine. And yours.
Let's not forget that.
Any of us!
Image Credit:
Gary A. Patton, personal photo