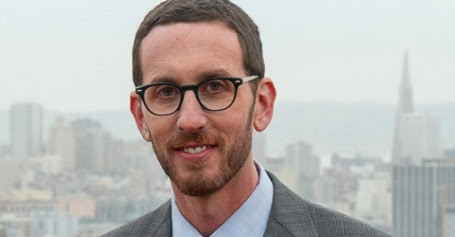 Pictured is State Senator Scott Weiner, who comes from San Francisco. Weiner has been leading the charge in the California State Legislature to eliminate or radically curtail traditional local government land use powers. It is Weiner's contention that local governments have been using zoning and other land use controls to discourage the production of affordable housing. Accordingly, Weiner has been promoting state legislation that will let the state, not local governments, make the key decisions that will determine the future shape and character of local communities.
One of Weiner's bills, Senate Bill 35, enacted in 2017, mandates the approval of various proposed developments without regard to their impact on existing neighborhoods or the natural environment. In Santa Cruz, a developer has proposed a huge high-rise structure on the corner of Branciforte Avenue and Water Street. An architectural rendering of the proposed development is shown below: 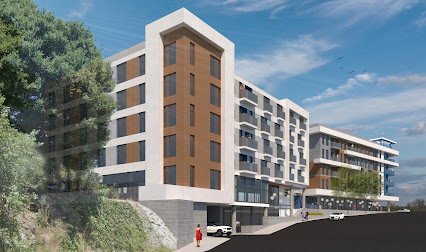 Thanks to SB 35, the developer may be able to gain approval of this proposed six-story structure (with a rooftop bar) without any environmental review whatsoever, and without any right for the City Council even to vote on the proposal. The project, if it qualifies for SB 35 treatment (this is currently being evaluated by the City Planning Department), will be considered a "ministerial" project.
Historically, "ministerial" projects are things like one single family dwelling, built on an already-existing single family lot. Or, perhaps, adding a carport to an existing residence. Big developments have traditionally had to go through a lot of local government review, including environmental review - and for a very good reason. The traffic, parking, water, and neighborhood impacts of large-scale developments may be extremely significant. The impacts of the proposed 831 Water Street development would certainly be significant, but under SB 35, qualifying proposals just get stamped at the counter! No votes. No chance for local residents to tell their elected officials what they think. What local residents think is irrelevant if SB 35 applies, since their local elected officials have been stripped of their traditional land use authority.
SB 35 was only the beginning, not the end, of Senator Weiner's efforts to eliminate local government control over land uses that might restrict what developers can do. Weiner is currently carrying a bill in the State Legislature, Senate Bill 9, that will override single-family zoning, and make it possible for developers to build up to four units on existing single-family lots. These developments, where permitted, would also be "ministerial." No City Council hearings will be required. No environmental review. As with SB 35, no votes! Property owner/developers will just go down to the Planning Department to get their ministerial approvals over the counter, and formerly single-family neighborhoods will be turned into multi-family neighborhoods - at the developers' discretion, with local residents and their elected officials having no say.
The motivating idea behind the Weiner Plan to displace local government authority is that the state needs more affordable housing.
And it does!
But does excusing developers from local review, including environmental review, and does increasing development densities without consideration of neighborhood and other impacts, actually lead to more "affordable" housing? Actually, not really! It mostly doesn't. It does lead to more profits for developers, however.
A recent article in 48 Hills, an online community newspaper published in San Francisco, points out what will really happen if SB 9 is enacted:

The immediate result if SB 9 passes as now written will be a BIG jump in the value/price of ALL the single-family home properties where this new development potential might be used. In the high-cost Bay Area, SB 9’s passage will add at least $100,000 to the price of any feasible house/lot. And most such homes in San Francisco could see jumps from $200,000 to $400,000 (view lots, etc.).

There is no way that instant price jump in home prices is a Good Thing. It will put even more housing units financially out of the reach of today’s hopeful home buyers. And it will make those properties even more attractive to “investors” (aka “flippers”) looking to exploit the State’s housing crisis for their own personal profits.

Those are Bad Things (emphasis added).

In Santa Cruz, our affordable housing crisis is not the result of some concerted effort by local elected officials to stop development. Because housing prices are almost always set by "the market," the problem comes from the fact that those who want to live in Santa Cruz, and whose income reflects what is typical for Santa Cruz residents, are almost always outbid for any available housing by those who are able to pay more, because they have higher incomes generated in the Silicon Valley, or elsewhere.
Eliminating the ability of local government officials to use zoning and other land use regulations to address community impacts doesn't solve the problem, and it will ensure, as 48 Hills has noted, that "Bad Things Will Happen!"
Image Credit:
https://48hills.org/2021/06/opinion-the-bad-things-about-wieners-housing-bill-sb9/