These comparison photos come from an article that discusses how a prototype set of contact lenses could allow a colorblind person to distinguish green from red.
A colorblind person would normally see the image on the left. A person who is not colorblind would see the image on the right. We consider colorblindness to be an impairment, since it precludes those who are colorblind from seeing the realities of our environment. The "truth" about what is out there is what we see on the right. Wouldn't it be great if everyone could appreciate that brilliant red (not to mention being able to distinguish a red light from a green light at the corner of a busy street)?
But what about colorblindness in the context of our efforts to achieve racial equity and justice? Shouldn't we all be seeking to live in a "colorblind" society? In such a society, as Martin Luther King, Jr. suggested, wouldn't everyone then be judged "not ... by the color of their skin, but by the content of their character?" Though this seems to be a goal to strive for, there is a real argument about whether or not "colorblindness" is a good policy to pursue, as we seek to achieve racial equity and justice.
Tim Wise, Wikipedia tells us, is an American activist and writer on the topic of race. Since 1995, he has given speeches at over 600 college campuses across the U.S. and has trained teachers, corporate employees, non-profit organizations and law enforcement officers in methods for addressing and dismantling racism in their institutions. Here is a link to his online book, "Colorblind, The Rise of Post-Racial Politics and the Retreat from Racial Equity."
In general, Wise is pointing out that a "colorblind" approach to racial equity is like colorblindness in real life. It is an epistemological impairment, preventing us from fully appreciating what we should actually see before our very eyes. Those who preach the need for a "colorblind" society are, in fact, attempting to prevent us from seeing the "truth" of what is actually out there. What is actually out there is white supremacy, white privilege, and the historic legacy of a systematic racism.
When someone says that "All Lives Matter," it is hard to deny it. In fact, this is true. It is an accurate statement. But, of course, since "All Lives Matter," it is obviously also true that "Black Lives Matter." "Black Lives" is a subset of "All Lives." Why is it important to cling, so strongly, to the "Black Lives Matter" declaration? Why isn't "All Lives Matter" at least as good, and maybe better - a "colorblind" approach to race relations? Since the "All Lives Matter" statement subsumes and includes all lives, Black Lives included, isn't that actually better? Many think so!
Well, we consider colorblindness an impairment, in real life, because it fails to make visible a part of what is real and "true" in the world in which we live together. Just as an inability to be able to distinguish red from green presents real problems to the persons afflicted with colorblindness, it also impacts all of us, since we are in this life together. Remember those traffic signals on busy streets! We want everyone to be able see the real facts of the case! To the degree we can do anything about it, we need everyone to be able to see what actually exists in the real world. Then, we can work together to deal with it.
Racial discrimination does exist in the real world. It is the residual byproduct of systematic policies pursued over hundreds of years, and in order to root it out, since "all lives matter," we must become aware of what is truly out there.
When we are aware, we can do something about it. But not if we are colorblind. 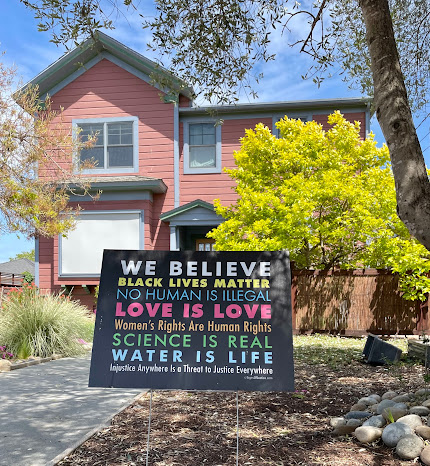