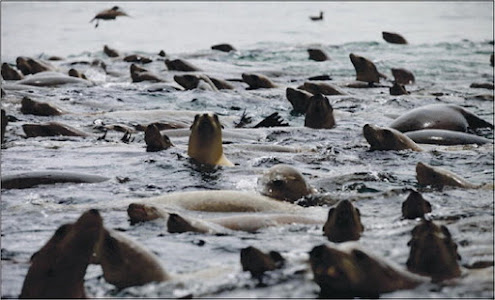 A "seal bomb," in case you are not familiar with that term, is a small explosive device, roughly the size of an index finger, used by fisherman to frighten sea lions away from the areas in which the fishermen want to fish. Of course, fishermen want to fish in places where lots of fish congregate. Unsurprisingly, that is where sea lions want to fish, too.
Each year, thousands of seal bombs are exploded within the confines of the Monterey Bay National Marine Sanctuary. They emit a bright flash when lit, and deliver a powerful concussion that is similar to that produced by the so-called "flash-bangs" employed by police. "Above water, the bang is about 160 decibels, slightly louder than a shotgun blast, but because sound waves travel faster and farther in water than air, the seal bomb explosions can be heard throughout the sanctuary."
My introduction to seal bombs came when I opened up The Mercury News on Sunday morning, April 11, 2021, and read an article on the first page of Section B. The article was written by Emily Harwitz, a science and environmental journalist and photographer who is a student in the science communication Master’s program at UC Santa Cruz. Harwitz' article is where I got both the information just relayed, and the quote.
The Mercury News subtitled Harwitz' article as follows: "Firecracker-like devices used by fishermen could be harming marine mammals." If that's true, and Harwitz isn't the only one who says it is, it does strike me that such devices should be totally banned in any area specifically set aside by federal law to serve as a "marine sanctuary." The National Marine Sanctuaries Act specifically provides, in its statement of purposes, that the Act is to "protect, and, where appropriate, restore and enhance natural habitats, populations, and ecological processes." The use of "seal bombs" doesn't seem very "protective" of marine mammal populations. It doesn't seem consistent!
Besides offering my free legal opinion that a lawsuit based on the provisions of The National Marine Sanctuaries Act should be successful in ending the use of "seal bombs" in the waters of our Marine Sanctuary, I have a more general comment. "Seal bombs" are an example of how human beings consistently refuse to live within the constraints of the Natural World.
We need to stop doing that!
If we don't, it won't be just the fish and the sea lions that will disappear. We will, too!
Image Credit:
https://enewspaper.mercurynews.com