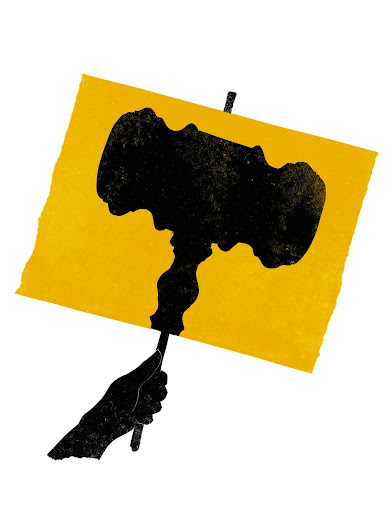 Samuel Moyn, a professor of law and a professor of history at Yale University, has written a very thoughtful article about "rights." Moyn's article is titled, "Why Do Americans Have So Few Rights?" The article appeared in The New Republic on March 9, 2021. Non-subscribers to The New Republic get three free articles a month, and my advice is to click on the link above, and to use one of those free looks to read what Moyn has to say.
Moyn provides a very nice review of "rights" scholarship, including an historical review of how the courts have treated "rights." Moyn also compares how "rights" are declared and enforced in the United States, and how "rights" are vindicated in Europe. That is, in fact, a main theme of the article. Again, this is an article worth reading.
For me, the point of most interest was Moyn's argument that seeking to find "rights" through judicial action has led to many problems - and certainly to the increased political polarization that has infected the judicial branch of government. Hardly anyone believes, anymore, that the courts are actually "impartial." Non-elected judges and justices receive lifetime appointments, and they are more and more known, primarily, by the partisan affiliation of the president who appointed them. Because deciding what "rights" people have, or should have, is actually a "political question," when we look primarily to the courts to define and enforce "rights," that requires the courts to play a "political" rather than a "judicial" role, and that is what they are increasingly doing.
The excerpt, below, gives you the flavor of what Moyn is saying:

American history shows that citizens owe many rights they enjoy less to courts interpreting the Constitution (unless you are rich) than to legislatures providing them in response to social movements. Congressional statutes like civil rights laws and the Voting Rights Act of 1965—protections that the Supreme Court has treated very badly—are good examples, often correcting earlier judicial malfeasance. Disability rights are a just cause, but faulting the Supreme Court for failing to read them into the Constitution seems less pressing than pondering the fact that it was the legislature that acted to declare new entitlements. The lesson of American history is that the politics of rights needs democracy more than it needs proportionality. Democratic action for renovating citizenship could even include more amendments (which originate in the legislature) for better versions of old rights and altogether new ones, like socioeconomic protections ...

We have to recognize that the only way to make the citizenship everyone deserves is through democratic contest and engagement. Greene’s warning about the absolutism of rights in the hands of judges shows why political decision-making needs to be wrested from them in the coming years. What Frankfurter said of liberty is true of equality and solidarity: Our entitlements are those we must provide one another in clashes of vision, and successes in winning enough backing for our side. This is not nihilism. It is the recognition that, while democracy is nowhere close to affirming and defining all the rights we need, there is no one else to do it but us (emphasis added).

I think that Moyn is correct in directing our attention to the need to make our democratic politics work. That is what we need to do if we are concerned about "rights." In the end, we live most immediately in a "political world." If we want to change that world, Moyn has put his finger on the sore spot: "there is no one else to do it but us."
Image Credit:
https://newrepublic.com/article/161561/americans-rights-jamal-greene-book-review