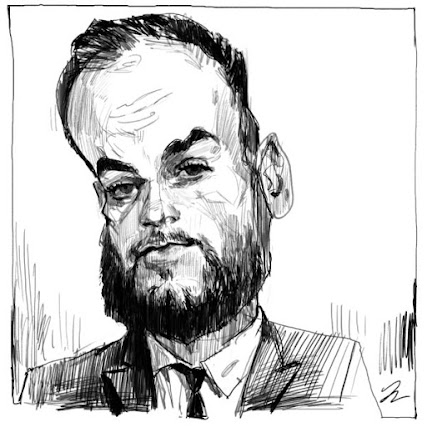 Spiked is a British Internet magazine focusing on politics, culture and society. The magazine has been funded in part by donations from the Charles Koch Foundation, and Wikipedia says that Spiked is generally considered to be "libertarian" in its editorial approach.
On February 19, 2021, Spiked published an article by Editor Brendan O'Neill, who is pictured above. O'Neill's article is titled, "It's time to get real about freedom of speech." Wikipedia reports that O'Neill was once a Trotskyist, and was formerly a member of the Revolutionary Communist Party writing for the party's journal, Living Marxism. O'Neill apparently now self-identifies as a "Libertarian Marxist," though I must confess that the "Libertarian Marxist" category is not one that is exactly crystal clear in my mind.
At any rate, I thought that O'Neill's recent column raised some important issues related to censorship and free speech. I think it's well worth reading. Here's how O'Neill starts out:

It’s hilarious when activists piss on the door of a feminist academic’s office because they don’t like her criticisms of gender self-ID. It’s hilarious when a disabled working-class grandfather is sacked from his job at Asda because he posted a Billy Connolly skit on social media that made fun of Islam. It’s hilarious when a Labour shadow minister loses her job because she dared to raise concerns about the grooming and rape of working-class girls in various parts of England. It’s hilarious when JK Rowling is bombarded with messages saying ‘fuck you bitch,’ ‘bitch I’ll kill you’ and ‘choke on my cock’ because she wrote an entirely non-prejudiced essay on trans issues. It’s all so funny. ‘FREEZE PEACH’ lol.
Make no mistake: when the cultural and media elites mock the idea of a free-speech crisis, when they insist cancel culture doesn’t exist, this is the reality they are denying. This is the abuse, demonisation and, yes, censorship that they claim is not real. Actually, it’s worse than that. These censorship deniers do not merely question the reality of these grim assaults on people’s free expression – after all, we can all see the tweets calling JK Rowling a ‘cunt’ and a ‘whore’, and we all know what urine splashed on someone’s door looks and smells like, so we know this stuff is real. No, they also implicitly justify these chilling crusades against open discussion. By refusing to describe these attacks as attacks on freedom of speech, they normalise them, they green-light them.

Most obviously, the censorship deniers, those nominally leftish people who claim there is no free-speech crisis on campus or anywhere else, just cannot be taken seriously. Such is their ideological blindness to the problem of contemporary censorship that they have become impervious even to facts and information. I know from personal experience that you can provide these people with loads of examples of ‘controversial’ individuals being No Platformed, arrested and even physically assaulted for their political or moral points of view, and it makes no difference. ‘Nope, there’s no free-speech crisis’, they’ll say.

Glenn Greenwald, who once wrote for another British publication, The Guardian, has also been thinking about issues related to censorship and free speech. Greenwald's article, which appeared in his Substack newsletter on February 20, 2021, was titled, "Congress Escalates Pressure on Tech Giants to Censor More, Threatening the First Amendment." Greenwald pays less attention than O'Neill to individual attacks intended to shut down someone's ability to comment on contemporary issues. Greenwald is specifically concerned about how elected officials are trying to compel various social media corporations to suppress opinions with which the politicians disagree:

House Democrats have made no secret of their ultimate goal ... to exert control over the content on these online platforms. “Industry self-regulation has failed,” they said, and therefore “we must begin the work of changing incentives driving social media companies to allow and even promote misinformation and disinformation.” In other words, they intend to use state power to influence and coerce these companies to change which content they do and do not allow to be published.
I’ve written and spoken at length over the past several years about the dangers of vesting the power in the state, or in tech monopolies, to determine what is true and false, or what constitutes permissible opinion and what does not. I will not repeat those points here.
Instead, the key point raised by these last threats from House Democrats is an often-overlooked one: while the First Amendment does not apply to voluntary choices made by a private company about what speech to allow or prohibit, it does bar the U.S. Government from coercing or threatening such companies to censor. In other words, Congress violates the First Amendment when it attempts to require private companies to impose viewpoint-based speech restrictions which the government itself would be constitutionally barred from imposing.

Both O'Neill's article, and Greenwald's, address problems of contemporary censorship that I think need to be taken seriously. Lots of things that people say are things with which I disagree, and some of them I consider to be truly horrible and obnoxious.
Still, while no "Libertarian," I am uncomfortable with the idea that obnoxious and horrible ideas should be suppressed - however that is accomplished. I particularly think that Greenwald's point, that when government officials try to use the power of our government to eliminate opinions which disagree with their own, we are treading into extremely dangerous territory.
Image Credit:
https://www.spiked-online.com/author/brendan-oneill/