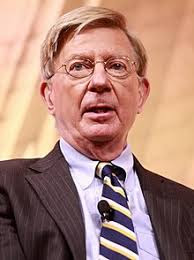 George Will, pictured above, writes opinion columns for The Washington Post. They are definitely on the "conservative" or "libertarian" side of the political spectrum. Last month, Will's post-inauguration column, which appeared in my local newspaper on January 22nd, characterized President Biden's Inaugural Address as follows:
Biden's Message for the dissatisfied:
'Time to grow up.'
That isn't how I, personally, would have characterized the president's speech, but then I rarely agree with George Will about anything. I did note with approval, however, one of the points Will made in his column.
Will pondered in his column why "450,461 of our dissatisfied fellow countrymen" voted to elect Congress Member Marjorie Taylor Greene and Congress Member Lauren Boebert.
Good question!
As Will noted, Greene refused to wear a mask when confined with other Members of Congress during the Trump-inspired invasion of the Capitol Building on January 6th. She also claimed that the Trump presidency had been a "once-in-a-lifetime opportunity to take this global cabal of Satan-worshiping pedophiles out." Greene also vowed to mount an impeachment effort against President Biden, the day after he was inaugurated. Does she sound a little unhinged, to you? She does to me! Boebert, clearly cut from the same cloth, is a Congress Member from Colorado, and Will reports that Bobert has "been preening about how admirable she is because she carries her Glock on Capitol Hill."
Will looked to Ben Sasse, a Republican Senator from Nebraska, to explain how people like that could ever have been elected to Congress:

One reason, Sasse said, is “America’s junk-food media diet,” the “underlying economics” of which involve “dialing up the rhetoric” to increase “clicks, eyeballs, and revenue.” Another reason is “institutional collapse” as “the digital revolution erodes geographic communities in favor of placeless ones. Many people who yell at strangers on Twitter don’t know their own local officials or even their neighbors across the street.” And the susceptibility of a significant portion of the citizenry to irrational rage reflects “the failure of our traditional political institutions and our traditional media to function as spaces for genuine political conversation,” creating “a vacuum now filled by the social-media giants (emphasis added).”

I like that "junk-food media diet" description, but what I really think is insightful (highlighted above) is Sasse's statement that the effect of our digital revolution has been to erode "geographic communities" in favor of placeless ones, indicating that this is what has led us to an ever more "unhinged" politics.
This is, I believe, a pretty profound observation. When we meet and greet each other "in the cloud," on digital platforms of all kinds, we operate in an artificial environment. That environment seems "real," but is not. Physical, geographic locations are, by their nature, "real." If you go up and down any block in your city, which is what politicians have always done (they call it "precincting"), you will meet with lots of different people, with lots of different ideas, but they will all be "real" people, and they will treat you as a "real" person, too. They are highly unlikely to think that you are a Satan-worshiping pederast, even if they don't like your politics one bit.
The people you meet in an online forum (on Twitter, or on your Facebook page, perhaps) are "real" people when you meet them where they live, but they are inhabiting an alternative reality when confronted online. I think Sasse is onto something. There really is something to that!
Tip O'Neill asserted that "all politics is local." Real politics is local. Locally-untethered politics, practiced in cyberspace, any politics not rooted in geographical communities, produces elected officials like Marjorie Taylor Greene and Congress Member Lauren Boebert.
Will (and Sasse) provide us another good reason to value our federal system, where local always counts the most!
Image Credit:
https://en.wikipedia.org/wiki/George_Will