#37 / Two Cheers For The Electoral College 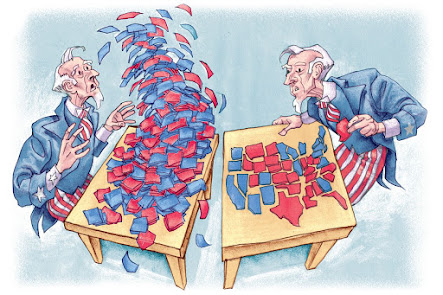 Christopher DeMuth, a lawyer and a distinguished fellow at the Hudson Institute, contends that "The Electoral College Saved the Election." He is talking about the 2020 Presidential Election, the one in which President Biden beat former President Trump. That was an important election to "save," and I think DeMuth's argument needs to be taken seriously.
Admittedly, DeMuth's view is not very popular with the kind of political progressives with whom I normally hang out. Wikipedia identifies the Hudson Institute as "politically conservative." I think that's pretty accurate. The Brookings Institution, called "centrist" by Wikipedia, is arguing for the abolition of the Electoral College. So are many of my friends.
The Electoral College system permits a person to be elected as president even though that person has received far fewer votes, nationwide, than the person who is declared to have won. It's hard to defend a system that can, and recently has, produced that kind of result. In an editorial urging the abolition of the Electoral College, The Washington Post makes a pretty good case:

OUR COLUMNIST Marc A. Thiessen noted last week that President Trump had come very close to winning reelection. “A flip of just some 73,700 votes in those three states [Arizona, Pennsylvania and Georgia] and Trump would be making plans for a second term — and we would all be taking about a ‘red wave,’” he wrote.
Mr. Thiessen’s point was that Mr. Trump’s near miss makes him a viable candidate in 2024. We draw a different lesson: It is alarming that a candidate came so close to winning while polling more than 5 million fewer votes than his opponent nationwide. The electoral college, whatever virtues it may have had for the Founding Fathers, is no longer tenable for American democracy.
We write this with full awareness of the challenges of adopting a new system, with respect for many of the people who continue to argue against a switch, and with awareness that any change may have unintended consequences. Right now, our presidential elections are conducted by 51 separate authorities, each with its own rules on registration, mail-in balloting and more. Each state counts its own ballots, and each decides when recounts are needed. All of that would have to change if the president were chosen based on the national vote count. Additionally, electoral college math induces candidates to pay attention to voters in some small states who might otherwise be ignored.

Against this argument in favor of abolishing the Electoral College system, DeMuth makes the following counterargument:

In the days following the election, Mr. Trump proclaimed he had won in a landslide only to have victory snatched away by massive election fraud. Many of his supporters—aware that the Democrats, media, and permanent government were willing to play dirty—rallied boisterously to his side.
The president’s claims were then adjudicated over several weeks in scores of local forums by hundreds of state and local election officials and state and federal judges, in six battleground states whose initial returns had gone narrowly for Mr. Biden—Arizona, Georgia, Michigan, Nevada, Pennsylvania and Wisconsin. The Trump team won a few procedural rulings, but ultimately lost every significant claim, drawing sharp rebukes for the flimsiness of its claims from several judges, including Trump appointees.
As the court losses mounted, Mr. Trump called on Republican legislatures to cast their states’ electoral votes directly for him, and on state governors and election officials to recalibrate their election results in his favor. In every case, he was firmly rebuffed. The states certified their final election results, and the 538 electors, meeting on Dec. 14, elected Mr. Biden, 306–232. Their votes were counted before a joint session of Congress on Jan. 6-7, where vote challenges were rejected on grounds of constitutional deference to the state certifications, even as a mob of Trump partisans stormed the Capitol, incited by the president’s mad claim that the session might reverse the election result.
This was the Electoral College system of diversified, independent, state-centered authority in action—steering sturdily through gales of hysteria, settling an election in an exceedingly dangerous storm. There had been more than the usual election irregularities, arising from lax procedures for mail-in voting and late counting introduced shortly before the election, and these certainly justify a commission of inquiry and tighter procedures in future elections. But if enough fraud and chicanery had existed to steal the election, hard evidence would have turned up somewhere. The most conspicuous irregularities were Mr. Trump’s own egregious efforts to subvert the Electoral College’s structure and procedures, which are ending his presidency in ruination and disgrace.
It wasn’t a pretty picture—but consider the picture under a national popular vote with national election standards and procedures. Incentives for vote rigging would be nationwide rather than limited to battleground states, and any recount would have to be nationwide as well. Election administration would perforce be vested in an executive-branch agency headed by the president. The agency might be a bipartisan commission with lengthy terms of office, but to be effective it would need a tie-breaking vote, cast by an official from one party or the other (or from one of multiple parties). It would be widely assumed that the president exercised significant control—and a president who would publicly berate state legislators and governors, and the Supreme Court and his own attorney general, as Mr. Trump did, would certainly try to exert such control.
We can only guess where such a spectacle might lead. Clearly, however, the settlement of a tumultuous election against a defiant incumbent shouldn’t be left to the government he leads (emphasis added).

In short, DeMuth is arguing that our federal system provides a "check and balance" against the kind of corruption at the federal level that can lead to an authoritarian takeover of our democratic politics. Hannah Arendt, the political thinker who has most directly addressed the dangers of totalitarian government, celebrated the federal system established in our Constitution for exactly this reason.
We have seen, vividly, in the Trump Administration, how a president who seeks to eliminate any constraint on his personal power can mobilize the government he controls to achieve whatever ends he desires. We really do need to take DeMuth's point seriously!
Image Credit:
https://www.wsj.com/articles/the-electoral-college-saved-the-election-11610133725