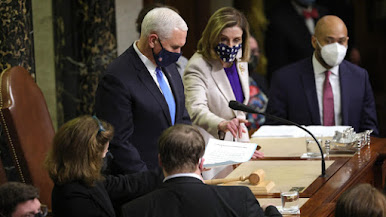 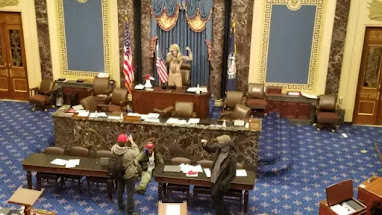 You have probably heard that President Trump made a Rose Garden speech on January 6th, several hours after the invasion of the U.S. Capitol Building by thousands of people who were inspired to initiate such an invasion by the president himself. You can click on the link to watch a video of that very short post-invasion speech, if you haven't already seen it.
The objective of the invasion, apparently, was to interfere with, or prevent, the process of counting the votes of the members of the Electoral College (see the photo at the top of this blog posting). That effort failed, though some of the invaders, wildly attired, were able to take selfies inside the Capitol Building, perhaps making it all worthwhile for them. The photo just above shows one costumed young man, in the Senate Chambers, getting his photo souvenir.
More seriously, it appears that at least five people died in this presidentially-inspired invasion, including a young woman who was shot (details not yet available), three who had health-related problems that led to their death, and a member of the Capitol Police who was injured by those who invaded the building, and who then died from his injuries. A news report indicates that a homicide investigation has been started with respect to the death of this police officer.
The President's post-invasion speech, as I understand it, was given in response to many requests from the president's own political supporters, who begged him to try to shut down the invasion that he himself had launched. I think one part of his post-invasion speech is worthy of particular note.
"We love you," the president said, obviously speaking for himself, and no one else, since I have neither seen nor heard of anyone, other than the president, who has celebrated the death and disorder that the president helped initiate. "Loving" those who carried out the invasion is one thing - a horrendous sentiment in and of itself. However, what struck me most was the use of the word, "we."
"WE love you," the president said. This grammatical usage is often called "the royal we," or "the majestic plural," and is appropriate (to the degree that it is ever appropriate) only when used by monarchs or the Pope. Its use by our president is a "tell," an indication that he does not believe that he is, in fact, a democratically-elected official, subject to the law, but believes, to the contrary, that the law proceeds from him. This is, of course, why he felt emboldened to encourage the invasion of the Capitol in the first place. Counting those Electoral College votes would certify that he had lost the 2020 presidential election, and that he must vacate the presidency on January 20th. As we have all witnessed, the president refuses to believe any such thing.
What is both amazing and unfortunate is that the president has been able, during the entirety of his term in office, to conjure belief among millions of people that the president's statements about reality, and about his own greatness, are accurate representations of the truth. It is too early to know what all the consequences of the invasion of the Capitol Building will be, but there is at least some possibility that this event went a bit too far, even for those who have been willing, up until now, to follow the president into his royal realm of fantasy and falsity. There is a chance, it seems to me, that the nation will now be disenthralled.
Let us hope so, for that is exactly what we need to be.
When the curtain was pulled aside in Oz, and the wizard revealed for what he really was, liberation was the result. Our current president is likely to use a helicopter, not a balloon, to escape from having to acknowledge his lack of any legitimate claim to the monarchical privileges he has asserted. That's fine by me.
Good riddance.
Image Credit:
(1) - https://www.theguardian.com/us-news/live/2021/jan/07/joe-biden-donald-trump-mike-pence-capitol-congress-us-election-coronavirus-live-updates
(2) - https://www.thesun.co.uk/news/13670163/white-house-trump-transition-us-capitol-four-dead/