#2 / No Triangulation On Climate Change Response 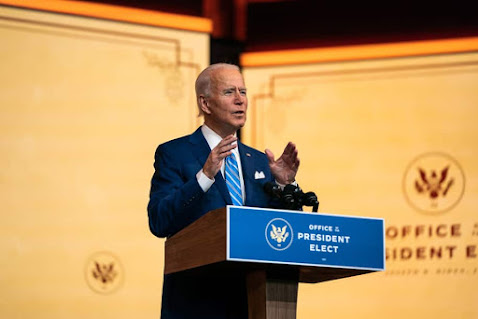 The Washington Post ran an important editorial on November 28, 2020. Because I know that The Post presents a paywall barrier that would keep many readers from following a link through to the actual editorial, I am not only providing a link to the editorial, but I have reprinted the editorial in its entirety. The editorial is titled, "Joe Biden must be the climate change president."
I absolutely concur with that evaluation. However, there was one suggestion in the editorial that gave me a little pause. One paragraph seemed to suggest that the president might want to take the following kind of route to needed climate change legislation:

A bipartisan climate plan that is neither the Green New Deal nor the do-nothing-ism that has so long prevailed. A proposal backed by senior Republican luminaries James A. Baker III and George P. Shultz, along with a massive swath of corporate America, would put a steadily rising fee on carbon emissions and rebate the proceeds back to Americans.

Here is my concern. It might be that some sort of "compromise" plan (calling on "the market" to save us from ourselves) will be the best that can be achieved. Hopefully not, however, because that would represent a "failure," not "success." The global warming crisis that confronts us is not a "political" problem alone. It is, above all, a "real" problem that is based on our continuing refusal to conform our activities to the natural laws that govern the physical world upon which our lives ultimately depend.
Because we have a "real" problem, and not just a "political" problem, we must do everything we possibly can to reduce carbon emissions. In other words, we must achieve not just what is politically possible, but what is physically possible. The rule must be: if we can reduce a category of emissions, then we must reduce that category of emissions - and we must reduce those emissions as rapidly as it is technically possible to do.
Let's be clear. Even that may not be enough, but that is what we need to do. To be "the climate change president," President Biden will have to shoot for that.
President Clinton, during his time in office, became famous as a political superstar by figuring out how to "triangulate," hewing to a path between opposing political forces. That strategy can, indeed, result in "political" success.
But our climate/global warming crisis is not a "political" problem alone. I hope Joe Biden won't think it is, because that will lead to failure in the only challenge that really matters: can we, in fact, and in the real, physical world (and not just in the world of politics) make the significant greenhouse gas emission reductions we need to make? There is no quick and technical fix. We need to reduce consumption and make fundamental changes in the way we operate our world. We need "net zero carbon emissions."
And when do we need those emission reductions? Now! ASAP!
Getting those real reductions, as quickly as technically possible, is what will make Joe Biden a "climate change president." That, and only that!
oooOOOooo
Joe Biden Must Be The Climate Change President
THE DAY Joe Biden became president-elect, he listed climate change among his top priorities. Last week, he named former secretary of state John F. Kerry to be his climate czar. It is crucial Mr. Biden and Mr. Kerry follow through. The United States has squandered too much time. The world has almost none left to avoid extreme consequences for generations living and those only just being born.
The biggest looming problem is the likelihood that Mr. Biden will face Republican resistance in Congress and a conservative Supreme Court inclined to block executive branch initiatives. Two decades ago, many Republicans acknowledged the threat of warming, while the fossil fuel industry funded campaigns to deny it. Now, even major oil companies say that climate change is a severe problem and favor a carbon tax to address it, but Republicans have made denying scientific expertise, and the science on global warming in particular, a matter of core identity. Still, there is room for hope.
Republicans have positioned themselves not only on the wrong side of the merits but also on the wrong side of public opinion. Exit polls showed that two-thirds of 2020 voters — including a massive chunk of Trump voters — think climate change is a serious problem. Many voters backed the president in spite of, not because of, his position on climate change. Meanwhile, educated suburban voters, once the keystone of the Republican coalition, recoiled from President Trump’s efforts to accelerate the GOP’s transformation into what then-Louisiana Gov. Bobby Jindal (R) termed “the stupid party.” Many Republican senators still represent these suburban constituencies. They should seek ways to show that they are more thoughtful than the president the suburbs just rejected.
They could do this by supporting a bipartisan climate plan that is neither the Green New Deal nor the do-nothing-ism that has so long prevailed. A proposal backed by senior Republican luminaries James A. Baker III and George P. Shultz, along with a massive swath of corporate America, would put a steadily rising fee on carbon emissions and rebate the proceeds back to Americans.
The path is narrow. If Republicans retain the Senate and it becomes clear that major legislation would go nowhere, Mr. Biden would be left with small-bore legislative options: boosting funds for environmental agencies; securing money to build out electricity transmission lines and public transit; advancing federal incentives for renewables. Mr. Biden could get some of these passed early on, in a covid-19 aid bill or a federal budget bill, and maintain pressure for larger climate legislation. But he should also prepare for the possibility that the bigger bill never comes.
The Clean Air Act delegates substantial authority to the president. The second he enters the Oval Office, Mr. Biden should reinstate and build on President Barack Obama’s legacy environmental regulations — rules on methane emissions, power plants and auto efficiency, to name a few — and integrate climate considerations into the exercise of every other executive authority he commands. He can also restart U.S. climate diplomacy by immediately reentering the Paris climate agreement.
In the past four years, the economics of clean energy have improved vastly, foreign countries have upped their game, and demand among businesses for federal action has shot up. If that still does not translate into passing a big climate bill, it may be that Mr. Biden can nevertheless cobble together enough smaller initiatives that, added together, lead to large reductions in greenhouse gas emissions.
Image Credit:
https://www.washingtonpost.com/opinions/joe-biden-must-be-the-climate-change-president/2020/11/26/b1fa95ec-2915-11eb-92b7-6ef17b3fe3b4_story.html