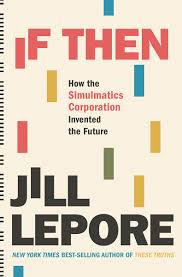 If the holiday season left you with a gift card to Bookshop, I have a suggestion on how you can spend it. I am, generally, pretty fond of Jill Lepore, the Harvard historian and frequent contributor to The New Yorker, and her latest book is another example of why I am right to be so fond. If/Then is the ultimate result of Lepore's discovery, by chance, of a bunch of old materials cached and forgotten at MIT. The book tells quite an interesting story, in an almost novelistic way - sex, intrigue, and betrayal are all placed into evidence. From Long Island, to Vietnam, to Cambridge, to Washington, D.C., Lepore follows a band of eccentrics who employed computers and computer techniques to "invent the future."
Of course, as Dr. Lepore points out in her last chapter, a different set of men would have invented the future, if these particular men hadn't done it first. But then it might have been a different future. Maybe one in which real human beings were more important than the data that these "Simulmatics men" determined were most useful for manipulating people to achieve a desired result.
Here's how Lepore concludes her story:

In twenty-first century Silicon Valley, the meaninglessness of the past and the uselessness of history became articles of faith, gleefully performed arrogance. "The only thing that matters is the future," said the Google and Uber self-driving car designer Anthony Levandowski in 2018. "I don't even know why we study history. It's entertaining I guess - the dinosaurs and the Neanderthals and the Industrial Revolution and stuff like that. But what already happened doesn't really matter. You don't need to know history to build on what they made. In technology, all that matters is tomorrow."

This cockeyed idea isn't an original idea; it's a creaky, bankrupt Cold War idea, an exhausted and discredited idea. The invention of the future has a history, decades old, dilapidated. Simulmatics is its cautionary tale, a timeworm fable, a story of yesterday. Because tomorrow is not all that matters. Nor is technology, and the next president, or the best dog food. What matters is what remains, endures, and cures.