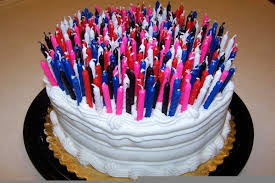 What do they even call the "pre-boomer" generation of which I am a member? I know about the "Boomers" (born 1946-1964), and about Generation X (born between 1960, maybe, and 1980). I think I sort of have have a fix on  Gen Y - the "Millennials" - (born between 1981 and 1996), and even Gen Z (born between the late 1990s and the early 2010s). I have, however, really lost contact with the nomenclature for my own group.*
What is the name of that generation that came after the "The Greatest Generation," which included my parents, and that came before all those "Boomers," who are so obviously present por todos lados? At any rate, whatever my generational cohort is called, birthdays require a lot of candles on the cake. As Kurt Vonnegut might have said, "so it goes!
In recent years, when birthdays have come around, I have tended to crank up The Traveling Wilburys one more time, and listen to "End of The Line," truly one of my favorite songs. You can click that link to join me, if you want to sing along. The Wilburys always provide me with just the kind of reassurance I need:

Well, it's alright, even if you're old and grey

Well, it's alright, you still got something to say

Well, it's alright, remember to live and let live

Well, it's alright, the best you can do is forgive

As the Quakers would put it, those lyrics definitely "speak to my condition." Old as I am, I keep churning out these daily blog postings, believing I still have something to say!
A couple of years ago, in an earlier blog post, I said this:

Strauss and Howe [in their excellent book, Generations: The History of America's Future: 1584 to 2069] say that their research on past generations leads them to expect a "crisis lasting from 2013 to 2024." They say "the early 2020's appear fateful," and they expect Malloch's "next Great Generation, the Millennials, will have "a chance to demonstrate civic virtue and to triumph over great adversity."

As I am remembering the book, that "chance to demonstrate civic virtue and to triumph over great adversity," will require my generation, whatever it is called - those of us who are ever more "old and grey" - to play a catalyzing role. Nothing automatic about that, I know, but I am hoping that Strauss and Howe are right!